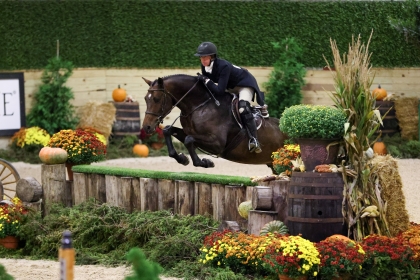 Wilmington, OH – Thirty stunning hunters gathered in the R+L Arena for the first Derby Friday of the Fall Classic series to compete over courses designed by Bobby Murphy of Lexington, KY. The huge ring was decorated from rail to rail with beautiful fall décor and the unique courses showcased beautiful natural obstacles such as a cornstalk fences and log walls. Competition was fierce in all three derbies with scores soaring into the mid-90s.

McBreen and the talented nine-year-old Danish Warmblood gelding navigated a lovely first round, opting to jump all four high options for a score of 84.5 from the judges.

It was a big derby debut for both McBreen and MTM Bentley, “This is my first and MTM Bentley’s first 3’6”-3’9” derby. I work for David Beisel, so normally he would be the one out here doing all of the showing, but I have been filling in while he’s been recuperating from his injury.”

“MTM Bentley is an amazing horse. David has helped me a lot with him and Lori [Taylor] is a super supportive owner. She let me practice a bunch last week, so we were well prepared for today,” said McBreen.

McBreen and MTM Bentley were one of the last pairs to return for the handy, “I took my time picking up the canter, because he gets a bit excited about the transition at times. I tried to land left off the first jump and stay consistent to two to three. I opted to go around to the in-and-out so I could stay straight. I gave him time to settle to the trot fence, then found a pretty forward slice to the cornstalk fence, but he was right with me.”

The pair jumped the final fence in perfect form, to receive a handy score of 89 for a two round total of 173.5 and the victory.

“Hero is my son’s horse. He lets me borrow him when I want to show. We have done four derbies together and we’ve received three firsts and one third. He is an amazing horse and I have so much fun jumping him around,” Reinhart shared.

Rinehart had a plan when she returned for the handy with Hero, “I am a little better off the left lead, so I decided to come to fence one on a nice left bend so I could take the inside turn to the cornstalk fence. I think it might have brushed his belly, so he got a little quick for a few steps but then came right back to me.”

The pair floated through the remainder of winding track for a score of 88 which equaled a combined score of 178, more than eight points higher than second place.

“This was the perfect preparation for indoors. Luke will be riding Hero in the 3’3” Junior Hunters. It’s so great to have such an amazing facility right here. We can show inside, the atmosphere is great, the jumps are pristine, and the quality of the footing is perfect.”

Eddlemon and 12-year-old Holsteiner gelding delivered a flawless first round to find a score of 92.

“Turtle [Donatello] is perfect. When his owner Addison isn’t here, I get the opportunity to show him. He’s so much fun and a fantastic horse. Once you get him in a rhythm, he will just carry and walk you down the lines. It’s the best feeling,” said Eddlemon.

Eddlemon praised the designer of today’s tracks, “The course was beautiful. Bobby Murphy always does an incredible job. The fall décor is spectacular, and luckily Donatello doesn’t look at anything. If you tell him where to go, he’s there for you.”

The talented pairing returned for the handy, “Even though I knew I was on top, I stayed bold and did all of the inside turns available.” Eddlemon and Donatello created a foot-perfect handy round to earn a 94 for a two-round total of 186, the highest score of the day.

Eddlemon and Donatello have gone four for four in derby victories, “I have only shown him in four derbies, and we won each one, but today was our best derby yet. This was my first time scoring in the 90s, which was an amazing feeling.”