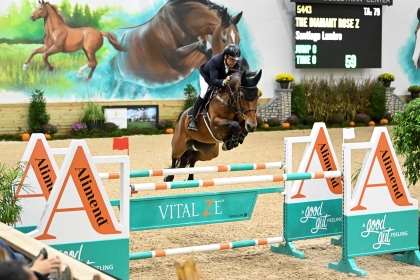 Wilmington, OH – World Equestrian Center – Wilmington was filled with excitement as spectators packed the stands to watch the $50,000 WEC Grand Prix. Renowned course designer, Guilherme Jorge (BRA) crafted the challenging tracks. At the end of the evening, it was Olympian Santiago Lambre (BRA) and his own The Diamant Rose Z  (Toulon x Diamant Z) that claimed the number one spot on the leaderboard.

Eighteen starters representing four nations competed over Guilherme Jorge’s impressive track, but only five managed to earn a slot in the jump-off.

Lambre secured two of the five spots in the jump-off, entering first with Pampero (Chacco-blue x Nekton). The pair swiftly raced around the jump-off track but had two unfortunate rails down in the process.

Next in to try their hand at the short course was Kady Abrahamson and Abrahamson Equestrian LLC’s Any (Aljano x Nina XI). Abrahamson and the 14-year-old Holsteiner mare flew through the jump-off track in 41.704 seconds with room to spare over each fence to ultimately earn second.

Thursday’s Welcome Prix winners, Tiffany Hammack and Foxwood Farm’s Verdi O’Merveilles were next in to try and beat Abrahamson and Any’s fast time. The pair galloped between fences taking each out of stride, but had a heartbreaking rail at the final fence, stopping the clock at 40.142 seconds which landed them in third place.

Santiago Lambre and The Diamant Rose Z were the final pair to compete over the jump-off track. Lambre knew he needed to go fast in order to steal the victory, “I watched Kady go and she was fast, so I knew I couldn’t play it safe. The Diamant Rose Z is naturally a fast horse across the ground and over the jumps, so I just let her open up.”

Lambre and 11-year-old Zangersheide mare angled fence one to land right to roll back to fence two. The pair dashed through the double combination and galloped through the rest of the track, finding a perfect distance to each fence. Lambre’s strategy paid off as the pair flew through the timers in 40.302 seconds, leaving all rails up for the victory.

Lambre recently reunited with The Diamant Rose Z since the Winter Spectacular Show Series in Ocala, “I sold her after the winter circuit, but she is a bit tough to ride, so I just got her back and have been riding her for only a few weeks. I am excited to show her more this winter.”

Lambre has been traveling, showing numerous horses in international competitions, “Currently I am showing the three-star in Lexington. I knew I wanted to come here to show my horses indoors before I compete at World Cup ™ Finals and Washington. It’s the perfect venue to prepare. This indoor is fantastic and the show offers great prize money. You also can’t beat the incredible footing, amazing jumps and they always have the best course designers. I am hoping to come back in a few weeks with a few other horses because you can’t beat the experience at World Equestrian Center.”

In addition to the grand prix victory, Santiago Lambre snagged the Vitalize® Blazin’ Fastest Four-Faulter Award aboard his other mount Casey.

Rinehart entered the arena first aboard Ron Caraway’s Vincent (Van Gogh x Nirande). Rinehart and the 10-year-old Dutch Warmblood gelding posted a first round time 73.712 seconds. The pair advanced straight to the jump-off, soaring around the indoor track and stopping the timers at 34.270 seconds.

“I can’t say enough good things about Vincent. He recently won a grand prix at Brownland. He’s an extremely careful horse, so moving back indoors, we decided to do the Futures Prix rather than the grand prix. My goal was to put in a solid round and that’s what we got. When we finished, I thought he posted a time that was going to be really tough to beat,” said Rinehart.

However, victory was not yet sealed. Michael D. Burnett (USA) and his own Chagrand (Chacco-Blue x Centogrina) laid down a speedy first round in 64.808 seconds, well under the time allowed of 77 seconds. Burnett and the 13-year-old Oldenburg gelding went straight to the jump-off, flying around the course stopping the clock at 33.136 seconds, to ultimately secure second place.

Rinehart returned later in the order aboard Niki Martin’s Kalou (Grand Slam x Gigi-Sijgje). “Kalou is an impressive young horse. We have been producing him to make him a quality Junior/Amateur horse for his owner Niki Martin.”

The pair produced an efficient first round in 72.051 seconds to qualify for the jump-off. Rinehart was determined to win, “Michael is a very good friend and former student. He had a beautiful round, and I knew I was going to need to take some chances to catch him.”

Rinehart and the skilled seven-year-old Dutch Warmblood gelding started on a strong gallop to fence one to land left and fly to fence two. The pair flew through the remainder of the course, not pumping the brakes once to stop the clock at an uncatchable time of 31.619 seconds to seal the victory.

Clearly proud of the careful gelding, Rinehart was effusive about the performance. “This was my first time really calling on him. He’s extremely rideable while he’s going fast which makes the jump-offs easy.”

Rinehart expressed his gratitude for both owners, “Niki Martin and Ron Caraway are both fantastic owners. I am so happy to be able to deliver great rounds on both horses. My wife won the 3’ Open National Hunter Derby yesterday, so it’s great to keep the hot streak going,” laughed Rinehart.