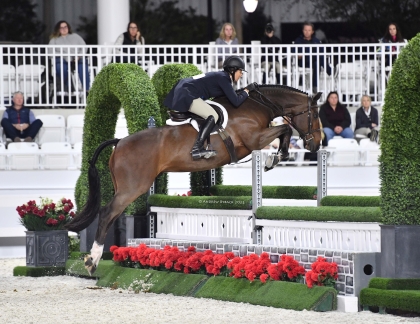 Steege was looking forward to the $20,000 WEC Ocala 3’6”-3’9” Hunter Derby in the WEC Grand Arena, “I have been super excited about competing in this class and actually had it planned in my schedule at the start of the year. To get to show in this ring with the hotel in the background, in this size and scope of an arena is incredible. The feeling of walking down the ramp into the Grand Arena, makes you feel so special and important.”

Steege and the stunning 10-year-old Belgian Warmblood gelding navigated a seamless first round, opting to take all four high options to earn a score of 91.5. Steege and Lafitte De Muze were the second to last pair to return for the handy, delivering a impeccable round, swiftly rolling through the inside turns to receive a 94 from the judges for an overall score of 185.5.

“Lafitte felt incredible tonight. He loves a crowd and loves a fun atmosphere. I knew Bobby Murphy was the designer for this class, and I am a big fan of Bobby Murphy’s jumps and courses. I am just so grateful to have this facility, with this ring and these incredible jumps. It’s truly a treat to all of us. I know Lafitte sure enjoyed it,” laughed Steege.

Just behind Steege and Lafitte De Muze, was Samantha Schaefer and Madeline Schaefer’s In The Know (Arkansas x Cavelle). Schaefer and the adorable 12-year-old Warmblood gelding set the standard for the class with a breathtaking first round, opting to take all four high options for a score of 94. Schaefer and In The Know were the last pair down the ramp into the WEC Grand Arena to contest the handy, navigating an effortless round to secure a score of 89.5, for a total score of 183.5.

Skylar Wireman and Heritage Farm’s Charisma (Stakkato x Cassini I) captured third place honors in tonight’s $20,000 WEC Ocala 3’6”-3’9” Hunter Derby. Wireman and Charisma produced a consistent, rhythmic first round for a score of 88. Wireman and the 15-year-old Warmblood gelding returned for the handy, producing a foot-by-foot perfect round while jumping each high option with ease to earn a score of 95, for a two-round total of 183.

Johnson and the 12-year-old Holsteiner gelding put forth a stunning first round, jumping each high option in perfect form to earn the class’s highest score of 90 from the judges.

“Blue Monday is the best. We call him Blue at home. He is owned by an adult that doesn’t show. She just enjoys him and takes lessons on him. He just comes out to the shows for derby classes. He shows up on Friday, doesn’t need any prep and wins.”

Johnson and Blue Monday were the last pair back in Hunter 1 to take on the handy track, “This handy course offered a few different options which was really nice. Blue loves to turn so it was super easy for him.”

Johnson also earned third place honors on her other mount Moonwalk with an overall score of 173.

Thirty-eight competitors took to Hunter 1 this afternoon to vie for the win in the $15,000 WEC Ocala 3’ Jr/Am Hunter Derby, but it was Devin Seek (Thunder Van De Zuuthoeve x Argenta VD Berghoeve) and Douglas Wheeler’s Citation that caught the judges eye.

Seek and Citation delivered a lovely first round, earning a score of 89 from the judges.

Seek hasn’t ridden Citation for a few weeks, “I haven’t ridden or shown Citation in three weeks because I had to go back to college. I just flew in last night and we decided to do the derby this morning. But Citation was perfect, and these courses really suited him.”

Seek and the eight-year-old Warmblood gelding were the final pair to come back to Hunter 1 for the handy, “I really liked this handy. This ring is smaller which made for a lot more places to be neat. In the Stadium you can get so lost, it’s gorgeous, but very massive. This arena is perfect for handy courses.”

Seek and Citation yielded a gorgeous round, swiftly rolling through the inside turns while taking the three high options earing a high score of 93 for a two round total of 182.

Before the start of the handy round in the $20,000 WEC Ocala 3’6″-3’9″ Hunter Derby, Bill Rube presented the prestigious Style of Riding Award to Jeff Gogul for his classic style and his sportsmanship. The recipient serves as a role model for preserving the integrity and tradition of equestrian sport. “This award is very special to me because the recipient of this award pays it forward both in and out of the show ring,” says Rube. Gogul received an elegant duffel bag and wore a pink rose corsage on his lapel throughout the handy round to signify his achievement.