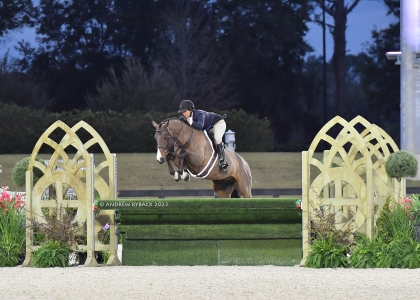 Twenty-one of the nation’s best hunter rider’s competed under the lights in the WEC Stadium to hunt for the top prize in the $20,000 Golden Ocala Golf & Equestrian Club 3’6”-3’9” Hunter Derby, but it was Amanda Steege and the infamous Lafitte De Muze  (Darco x Everlychin De La Pomme) owned by Cheryl Olsten that displayed two impeccable rounds for two impressive scores.

Steege and the 11-year-old Belgian Warmblood gelding produced a superb effort in the first round for a score of 93.

Lafitte De Muze had quite the successful season since the 2022 Winter Spectacular Show Series at World Equestrian Center – Ocala last year, “It feels amazing to be back at WEC. Lafitte had a great year; he was champion at a lot of renowned horse shows in the High-Performance Hunters and he won a few international USHJA derbies throughout the year. He went to Derby Finals and ended up seventh, then he went on to Capital Challenge where he was champion in the High-Performance Hunter division. He had some time off after Capital Challenge, then we started getting him back in shape in December.”

Steege and Lafitte De Muze returned to the handy on top, “Even though I was leading, it was still a tight race. Daniel [Geitner] was just one point from me in the first round, then he scored a 93 in the handy, so right then I knew I really had to show Lafitte off.”

“I could trust Lafitte’s jumping style to be recognized by the judges, but I knew I had to be as handy as I could and show off a little pace to win it,” remarked Steege. “I was the only one that did the inside turn back to the trot fence. Lafitte and I have such a trusting partnership at this point, I just thought about turning and he was right there with me. Then he found the trot fence perfectly and landed left. I was so happy that he landed all of his leads, because that has been something we have really been working on. He was perfect through the combination and jumped so well over the last.”

The pair negotiated a foot-by-foot perfect handy track to earn a 94 for a two-round total of 187 for the victory.

Steege expressed her overall appreciation for the talented and beloved gelding, “Lafitte has always been amazing, but today, I could really tell how much he has matured from last year. We have been working on a lot of things at home to improve our scores and today, it showed how much he absorbed. He has developed such a fun crowd following and even people that aren’t familiar with the sport get excited when they see him jump. That’s one of our favorite parts about WEC. They don’t charge for admission or parking and they encourage the public to come out and fall in love with the sport like we all do.”

The $15,000 UF Veterinary Hospital 3’ Open Hunter Derby welcomed an elite field of 33 stunning hunters to vie for the top prize over the beautifully decorated tracks built by Joe Carnicom. Ultimately, the blue ribbon was awarded to Timothy Maddrix and Missy Nolen’s Cypress after the pair found two scores in the 90s.

Maddrix and the 12-year-old Warmblood gelding put forth a stellar performance during the first round to earn a high score of 90.

Maddrix shared his enthusiasm about being back at World Equestrian Center – Ocala, “It’s great to be back. All the horses were on a bit of a break since October, and this is our first week showing. We will be here for the entire circuit, and I am looking forward to all the derbies. I love the derbies out in the Stadium, the jumps are always impressive, and the horses rise to the occasion.”

“Cypress is an older horse. He’s been there and done that, and he likes to pick his days. Today was a good day. I knew it was going to be a good day during the first round. He was alert and had a lot of positive energy,” Maddrix shared.

Maddrix and Cypress sat on top going back to the handy, “Cypress is a very handy horse, but I do wish I walked the handy track this morning. I ended up walking around the outside of the arena to see what turns I could do,” said Maddrix.

“I ended up sticking with my original plan. A lot of people were having trouble with the trot jump, but my horse isn’t spooky at all, so I knew that wasn’t going to be an issue. The only turn I was second guessing was to go inside to the last jump, but I didn’t because he was so fluid everywhere else. I didn’t want to risk stepping off the lead and shifting. I just tried not to lose,” joked Maddrix.

The pair floated around the handy track to receive a high score of 94 for a two-round total of 184 for the win.

“Cypress is the best. I have known him for many years, and he always goes so well in that ring. Today, everything was right out of stride, and he jumped beautifully. I am looking forward to the rest of the circuit,” expressed Maddrix.

Fifty horse-and-rider combinations took to the WEC Stadium this afternoon to compete for the lion’s share of the prize money in the $15,000 WEC Ocala 3’ Jr/Am Hunter Derby, but none could best Luke Sassi and Dominque Damico’s Waterfall Z (Landsdowne x Welodiena).

Sassi and the 13-year-old KPWN gelding navigated an effortless first round while jumping all four high options to secure a score of 87 from the judges.

Sassi spoke about his stunning mount, “Waterfall is my sister’s horse. She does the junior hunters with him and when she can’t show I get to show him in the derbies. He’s so much fun to ride. You just have to keep his attention on the jumps, and he is perfect. He is never spooky and wants to do a good job for you.”

Sassi and Waterfall Z were the second to last pair to return for the handy, “We wanted to do enough to try to win, but nothing too crazy. I went in between the two oxers to get to the trot jump, then I landed left to stay inside the gazebo to the high option at the end of the arena. After the double combination, I stayed inside everything to get to the fence on the rail and did the inside turn back to the high option. He’s a very handy horse, so he stayed right there with me the entire time.”

The pair meandered around the track putting forth a gorgeous effort to earn a high score of 92 for an overall score of 179.

Sassi enjoyed today’s derby in the WEC Stadium, “It was a lot of fun to be able to just canter around in such a big ring. I have done the jumpers out here all week, but it was fun to change up the pace and hunt for the fences.”

‘THE STYLE OF RIDING AWARD’

Before the start of the handy round in the $15,000 WEC Ocala 3′ Jr/Am Derby, the prestigious Style of Riding Award was presented to Isabelle Ehman for her classic style and her sportsmanship. The Style of Riding Award is generously presented by Bill Rube to be awarded to the rider who best displays the American Style of riding in the ring and sportsmanship outside of the competition arena. The recipient serves as a role model for preserving the integrity and tradition of equestrian sport. “This award is very special to me because the recipient of this award pays it forward both in and out of the show ring,” says Rube. Ehman received an elegant duffel bag and wore a white rose corsage on her lapel throughout the handy round to signify her achievement.