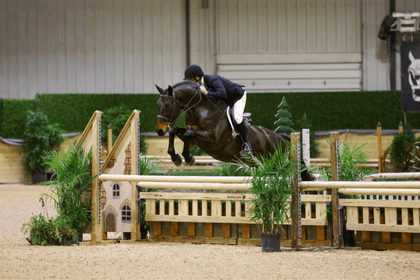 Wilmington, Ohio – Hunter competition took center stage in the R+L Arena on Friday evening for Winter in the Midwest Winter Classic #5 at World Equestrian Center – Wilmington. The field of textbook hunters impressed the judges boasting scores into the high 90s in the $15,000 USHJA National Open 3’ Hunter Derby. The seasoned group of athletes was nothing short of spectacular, but it was Jason Berry and Rock Point that displayed two remarkable rounds to bring home the blue ribbon.

Robert Barton’s (USA) flowing track allowed the riders opportunities to flaunt their horse’s rhythm and scope. A long flowing bending line, an impressive stone wall, and a long run oxer brought out the most impressive jumps from each horse that entered the arena. The handy phase offered multiple different tracks, where riders could choose their turn to the first fence, as well as the trot jump to the rollback on the final oxer.

Berry, no stranger to victory in the R+L Arena after coming off a trifecta at Winter Classic #4, laid down two breathtaking rounds, maintaining a beautiful rhythm in each round allowing Rock Point to jump in top form. With a high first-round score of 93, Berry made strategic decisions in the handy to ensure and error free ride on his new mount.

Berry of Jason Berry Stables in Verona, Virginia, spoke on his handy effort, “This horse had such a big score going into the handy that I knew I could play it safe. I was a little bit worried about the airy vertical in the handy, but he is such a good jumper that when gets his eye on something he jumps it amazing. He landed left and drifted toward the gate at jump one, so it was not worth the risk of missing the change to make the inside turn, so I took the long approach.”

The eight-year-old Oldenburg gelding, a new face of Jason Berry Stables, did not back off from the difficulties of the track. With Berry in the irons, the young horse showcased his promising talent and paved the way for his bright future. The duo landed a score of 89 in the handy round for an overall score of 182 to take the win.

Earlier in the afternoon, the R+L Arena saw 25 horse-and-athlete combinations in the $15,000 USHJA National 3’ Non-Pro Hunter Derby. The class saw numerous high scoring duos; however, none came close to Sophia Tabasso and Solitude.

Tabasso, training out of Hunt Hill Farm in Chester Springs, Pennsylvania, piloted her very own Solitude to two picture-perfect hunter rounds, taking the lead in the first round with a score of 91. Tabasso spoke on her longtime partner, “he [Solitude] is super special to me. I have had him for about two years now and he is the absolute sweetest in the barn. He always tries 100% and gives me his all every time. We have formed a really special bond.”

At the conclusion of the first classic hunter round, Tabasso came back to try her hand at Barton’s handy phase. The duo entered as the final pair to contest for the win. With consistent second round scores in the high 80’s, Tabasso had her sights set on maintaining her leading position.

The 11-year-old Warmblood gelding impressed the judges with his athleticism and natural rhythm. The stunning pair laid down a brilliant second round to score a 96 for an overall score of 187, ultimately besting the field by 9 total points.