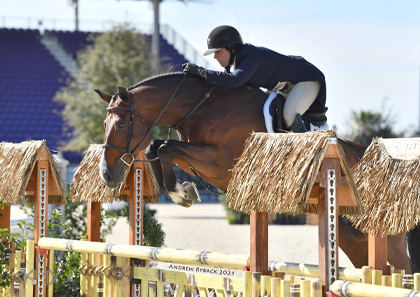 This afternoon’s $20,000 WEC Hunter Derby 3’6″-3’9″ saw a thrilling win for Amanda Steege and Cheryl Olsten’s Lafitte De Muze (Darco x Everlychin De La Pomme). Steege and the 9-year-old Belgian Warmblood gelding took top honors in the class during Week 6 of the World Equestrian Center – Ocala Winter Spectacular and have been on a roll since then, also taking 1st place last week in the prestigious $50,000 WCHR Palm Beach Hunter Spectacular. This afternoon, the pair found a near-flawless first round, taking all four high options for an outstanding score of 99. Steege and Lafitte De Muze brought the same finesse to the handy round, taking inside turns to fences 2, 5 and 6, along with all four high options. They earned a second score of 94, brining their overall total score to 193 for 1st place.

Melissa Donnelly and Elizabeth Becker’s Corlando 49 (Cartani x Olanda I) also demonstrated two fantastic rounds this afternoon. Donnelly and the 15-year-old Holsteiner gelding have collected several top ribbons in the $20,000 WEC Hunter Derby 3’6″-3’9″ throughout the winter and were impressive again today. The duo earned scores of 87 and 89 for a total of 176 and 2nd place.

Morgan Ward and Bruce Green’s Cypress (Quidam De Revel SF x Kassini) rounded out the top three placings this afternoon. Ward and the 14-year-old Dutch Warmblood gelding have also been racking up top placings in the $20,000 WEC Hunter Derby 3’6″-3’9″, and the pair collected another yellow ribbon today with scores of 83 and 84.5.

Steege of Ashmeadow Farm in Califon, New Jersey, and Ocala, Florida took a few minutes to clat with us after the class, “Lafitte has been on a bit of a roll recently. He’s been an amazing partner for me for the past four years. During Week 6 he won the $20,000 WEC Hunter Derby 3’6″-3’9″, which really set us up for going to Wellington, where he won the $50,000 WCHR Palm Beach Hunter Spectacular, which was a dream for myself and his owner. We came back to Ocala and he had an easy week last week. He had most of this week just hacking and relaxing. Truly, he loves to show, though. You can tell that he starts to get bored and mischievous when he’s not in the show ring.”

She explained, “The next big class that we want to have him ready for is the $75,000 WEC Hunter Derby 3’6″-3’9″ here during Week 12. Myself, his owner and my boyfriend and barn manager, Tim Delovich, decided that he needed to do one more class, so we entered him in today’s derby. He was amazing. He gets better every time we show. To get a 99 today was very exciting.”

She added, “I am so thankful to Lafitte’s team. It takes a village to keep a horse in top form, so thank you to everyone from his farrier, to his vet, to his grooms, to his owner, Cheryl Olsten, and to Tim Delovich. It makes a huge difference having such a great team behind you.”

This morning’s $15,000 WEC Derby 3′ Open saw a field of 22 entries with Amanda Steege and Lisa Arena Davis’ Balou (Balou Du Rouet) earning top honors. The 17-year-old Westphalian gelding is a long-time partner for Steege, and the pair took the Champion title in the Performance Hunter 3’3″ earlier this week, preparing them well for this morning’s derby. Steege and Balou delivered a lovely first round, taking all four high options for a score of 91. The pair returned last in the handy round, with a stylish performance that included tidy inside turns to fences 5, 6, 7 and 9, along with all four high options. They earned a handy round score of 90, bringing their two-round total to 181 for the win.

Rounding out the top three placings were Issac Leffkowitz and Redfield Farm’s True Balou (Balou Du Rouet x Carmina). Leffkowitz and the 10-year-old Warmblood gelding earned several ribbons in the Green Hunter 3’3″ earlier this week and were on form this morning. The duo earned scores of 83 and 86, totaling 169 for 3rd place.

Steege took time to chat with us ringside about her win, “Balou is owned by Lisa Arena Davis and he is 17 years old, this year. We have had him in our barn and have taken him to horse shows for the past 11 years. I showed him a lot as a young horse and, over the past few years, his owner has taken over showing him in the amateur classes. He has only shown once in the past year due to COVID, but we couldn’t pass up the opportunity for him to show at this facility, so she sent him with me for this week. He did two 3’3″ performance classes earlier this week and got a pair of 87 scores, and ended up Champion of the division. He’s like an old shoe for me, it’s very easy for me to ride him around. I do think it is really impressive for him to take a year off of showing and walk into such a big venue without hesitation. That’s a big thrill for us.”

When asked about her plan in the handy round, Steege replied, “My plan was to start with a nice pace and try to maintain one pace throughout the round. I wanted to be as handy as I could be, and the turn to fence 9 was actually quite difficult, so I was happy to have a partner that I know so well.”

Steege also piloted Elena Barrick’s Truman to an 8th place finish in this morning’s $15,000 WEC Derby 3′ Open, “Truman is a horse that I just met this week. I had the opportunity to catch ride him for Kim Hopkins. He is a young green horse, so he has not done a lot of derbies. He was fantastic, I was really proud of him in the handy round, he just had a little look at the trot jump. I’m excited to maybe do another derby with him in the future.”

She also added, “We are loving World Equestrian Center. We’ve gotten to show here for quite a few weeks this year, and we feel so lucky to have this amazing facility just down the street. I don’t think there’s any facility better than WEC in the whole world.”

Thirty-eight entries contested the course in this afternoon’s $15,000 WEC Derby 3′ Non Pro, but it was Addison McQuaker and her own Golden Ticket (Stakkato Gold) that earned the top spot. McQuaker and the 5-year-old Oldenburg gelding took the Champion title in last week’s Junior Hunter 3’3″ 15 and under division and were well-schooled for this afternoon’s class. The pair was breathtaking, earning a score of 91, the highest score of the first round. In the handy round, 13-year-old McQuaker piloted Golden Ticket seamlessly through all inside turns, earning a second score of 92 for a total score of 183, topping the class.

Christopher Coberley had another successful ride aboard Havens Schatt’s Actender PS (Action Breaker x Conpila) this afternoon. Coberley and the 8-year-old Oldenburg gelding have taken several top placings in the $15,000 WEC Derby 3′ Non Pro throughout the winter, including 1st place during Week 5. This afternoon, the pair were on their game, earning scores of 90 and 91, totaling 181 for 2nd place.

Isabel Harbour and IMH Equine, LLC’s Fitz (Numero Uno x Kootje) also demonstrated two beautiful rounds in the $15,000 WEC Derby 3′ Non Pro. Harbour and the 13-year-old Dutch Warmblood gelding topped the class during Week 4 of the World Equestrian Center – Ocala Winter Spectacular and took to the course this afternoon in search of another win. The pair earned scores of 85 and 86, totaling 171 for 3rd place.

McQuaker, who trains with Mac McQuaker of Gryphon Farms in Ontario, Canada, took a moment to chat with us after the awards presentation, “Golden Ticket was really good today. He’s really young, so we didn’t want to be too aggressive. We stayed slow and steady. We practiced the final inside turn and it worked out well.”

When asked about Golden Ticket’s personality, McQuaker replied, “He’s really sweet and funny. He really likes treats, his favorites are donuts and bananas. He has a birthday coming up on March 12th!”

Before the start of the handy round in the $15,000 WEC Derby 3′ Open, the prestigious Style of Riding Award was presented to Brooke Kemper for her classic style and her sportsmanship. The Style of Riding Award is generously donated by Bill Rube to be awarded to the rider who best displays the American Style of riding in the ring and sportsmanship outside of the competition arena. The recipient serves as a role model for preserving the integrity and tradition of equestrian sport. “This award is very special to me because the recipient of this award pays it forward both in and out of the show ring,” says Rube. Kemper received an elegant leather duffel bag and wore a white rose corsage on her lapel throughout the handy round to signify her achievement.

The Shapley’s Champion Groom Award for the best turnout in the class was presented to the groom of 4th place finisher in the $15,000 WEC Derby 3′ Open, Hamilton (Numero Uno x Upper Class). Shapley’s is a proud sponsor of the World Equestrian Center and is thrilled provide an award each week of the Winter Spectacular to the groom of the best turned out horse. Hamilton’s groom received a Shapley’s Award Bucket for the gelding’s stunning turnout.