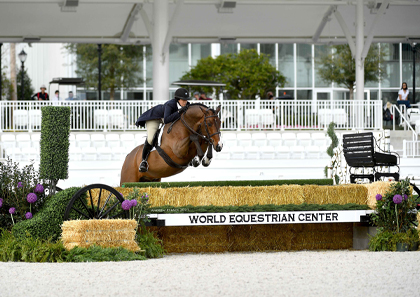 More than 100 entries took over two rings for the Winter Spectacular Week 6 Derby Friday at the World Equestrian Center — Ocala Winter Spectacular. The highlight of the day was the $20,000 WEC Hunter Derby 3’6″-3’9″, which took place in the WEC Grand Arena this afternoon. The $15,000 WEC Derby 3′ Open and $15,000 WEC Derby 3′ Non Pro filled Hunter 1 throughout the morning and early afternoon. Competition was fierce in all three derbies with scores in each soaring into the 90s.

The stately Equestrian Hotel set the backdrop for the $20,000 WEC Hunter Derby 3’6″-3’9″ in the WEC Grand Arena this afternoon. The ring featured a lovely course designed by JP Godard that featured a myriad of natural obstacles including a log wall and a wagon wheel fence. Thirty-three entries contested the course, and it was Amanda Steege and Cheryl Olsten’s Lafitte De Muze (Darco x Everlychin De La Pomme) who earned top honors with a pair of scores in the 90s.

Steege and Lafitte De Muze previously took 2nd place in the $20,000 WEC Hunter Derby 3’6″-3’9″ during Week 4 of the World Equestrian Center — Ocala Winter Spectacular and returned this afternoon hunting for the blue ribbon. Steege and the 9-year-old Belgian Warmblood gelding laid down a foot-perfect first round, taking all four high options for a score of 92. The pair returned last in the handy round, delivering a second stunning round, taking all four high options and handy inside turns to fences 4, 7 and 9. They were awarded a score of 93 for their performance, totaling 185 for 1st place.

Samantha Schaefer and Madeline Schaefer’s In The Know (Arkansas x Cavelle) were hot on Steege’s trail. Schaefer and the 11-year-old Warmblood gelding bested Steege and Lafitte De Muze during Week 4’s $20,000 WEC Hunter Derby 3’6″-3’9″, taking 1st place by just two points. Schaefer and Steege went head to head again this afternoon as Schaefer and In The Know earned scores of 90 and 91, totaling 181 and sliding into 2nd place just 4 points behind Steege.

Steege of Ashmeadow Farm in Califon, New Jersey, and Ocala, Florida took a moment to chat with us ringside about her win, “It was great, it’s such a privilege and an honor to get to show in this ring. We’ve already done a few weeks at WEC this year, but this is my first week getting to compete in the Grand Arena. It’s just magnificent, the jumps were beautiful and the competition was really stellar. Lafitte and I had a great time.”

When asked about her plan in the handy round, Steege replied, “My plan in the handy round was to go as handy as I could while still being smooth. I was really impressed with my horse, he was so adjustable and rideable, particularly after jump 3 where there was a pretty tight rollback turn to the trot jump. He just turned on a dime and I had so much room. Overall, I was really happy with the horse and I can’t wait to do it again. We’ll show again Week 12 and possibly Week 9.”

Steege explained why Lafitte De Muze is such a special horse, “Lafitte De Muze is 9 years old. He belongs to a client of mine, Cheryl Olsten. I flew to Germany and tried him as a 6-year-old, so this is our fourth year with him. Since we imported him, he’s really been unstoppable and has won major events all over the country. I think, what is really notable about him, is that he does his work for charity. He is the first-ever Equine Ambassador for the Equus Foundation, meaning that all of his earnings are donated to the foundation. According to Equus Foundation, they are the only national charity in the United States 100% dedicated to ensuring the welfare of America’s horses and fostering the horse-human bond. Equus Foundation’s mission is to protect America’s horses and strengthen the bond between horses and people. It makes it feel even more special when you win a big class because you know the money is going to help others.”

She also added, “We have spent every winter in Ocala since 1998 and we are thrilled to have this venue in our backyard. I am also a Golden Ocala ambassador, so it’s exciting to come here with everything finished and get to partake in the competition. I think that everybody should come and see WEC. It really is top-notch and everybody here is so happy to be here. The horses really love it here and I hope that everyone can come to support it.”

This morning’s $15,000 WEC Derby 3′ Open saw a field of 31 entries vying for the win over a course designed by Joseph Carnicom that featured four high options and several inside turn opportunities in the handy round. Several entries scored into the mid-90s, but it was Hillary Johnson and Copper Fox, LLC’s Moonwalk (Quasimodo Z x Olavsca-F) that nabbed the win.

Hillary Johnson and Copper Fox, LLC’s Moonwalk (Quasimodo Z x Olavsca-F) laid down two stellar courses in this morning’s derby. She and the 13-year-old KWPN gelding took 2nd place in the $15,000 WEC Derby 3′ Open during Week 4, and returned today in hopes of another top placing. Johnson and Moonwalk wowed the judges in the first round, earning the highest first round score of 94. The duo returned for the handy round taking effortless inside turns to fences 2, 5, 7 and 9 along with all four high options. They were rewarded for their second elegant round with a score of 92, totaling 186 to win the class.

Jeff Gogul and Abby Wagner’s No Doubt (Nerrado x Abba II) were just behind Johnson and Moonwalk. Gogul and the 8-year-old Holsteiner gelding earned 1st place in Week 3’s $15,000 WEC Derby 3′ Open and were impressive again today. The pair earned scores of 89 and 96 for an overall total of 185 and second place.

We caught up with Johnson after the class to chat about her win, “I had three horses in the class and Moonwalk was the third of my rides. He was just doing the class as a warm up class for the Amateur Owner classes this weekend, but he’s always a blast to do these fun classes on and I felt like he went great. It was kind of a tough course today and he rode really well.”

When asked about her plan in the handy round, Johnson replied, “My plan was to be handy, but not too handy. He was just doing it for a warm up, so we didn’t want to go too crazy, but we made the appropriate turns for him and I thought he went really well.”

Johnson told us a bit about Moonwalk, “We’ve had him for about six years, now. We got him as a first year horse and I’ve gotten to show him along the way. He’s a very special horse to us. I don’t show him very often anymore, so once in a while I get to pull him out for a fun class to get ready for his weekend and it’s always a pleasure to ride him.”

She also told us about her business, “I work for our family business, Meadow View Farm, based out of Grand Rapids, Michigan. My parents started the farm 35 years ago and my husband and I recently purchased the farm from them.”

Johnson added, “We absolutely love it here at WEC and we are very happy to be showing here. We’re enjoying our time here.”

Forty-one entries contested the course in this afternoon’s $15,000 WEC Derby 3′ Non Pro. The course was identical to that of the $15,000 WEC Derby 3′ Open with four high options and several opportunities for inside turns on the handy course. Like the professionals, several of the juniors and amateurs scored into the 90s, but it was Charles Casey and Alexa Kaas’ Charismatic that topped the class.

Charles Casey and Alexa Kaas’ Charismatic (Chap x Hauptstutbuch) took to the course near the end of the order in the first round. While the 10-year-old Hanoverian gelding is a newer mount for Casey, he is no stranger to the winner’s circle and has won several derbies at World Equestrian Center in Wilmington, Ohio, with trainer Linda Radigan. This afternoon, Casey and the stylish chestnut gelding navigated a flawless first round, taking all four high options for a score of 89. They returned for the handy round, taking tidy inside turns to fences 2, 5 and 7 along with all four high options. The duo was awarded a handy round score of 92, totaling 181 to win the class.

Taylor Ahern and Carol Jardine’s Qutio Van Het Panishof also laid down to impressive rounds this afternoon. The pair won the $2,500 Non Pro Hunter Derby 2’6″ last week and stepped up to the $15,000 WEC Derby 3′ Non Pro today. They earned scores of 86 and 89 for a total of 175 and a 2nd place finish.

Casey took a moment to chat with us about his win aboard Charismatic, “Charismatic is owned by Alexa Kaas and I just started riding him about two months ago. Linda had ridden him in some of the bigger derbies and she handed him over to me to jump this stuff. I quite like him, I think he’s great.”

Casey commented on his plan in the handy round, “After watching the first few go in the handy I thought that I could be fairly conservative and still earn a pretty good score. I just tried to have a nice, smooth round.”

Casey explained, “I’m 21 years old and I’m riding with Linda for the winter. I’m from Virginia. I just started doing the hunters about two months ago, so it’s working out well, I guess! I’m really happy.”

Before the start of the handy round in the $20,000 WEC Hunter Derby 3’6″-3’9″, the prestigious Style of Riding Award was presented to Amanda Steege for her classic style and her sportsmanship. The Style of Riding Award is generously donated by Bill Rube to be awarded to the rider who best displays the American Style of riding in the ring and sportsmanship outside of the competition arena. The recipient serves as a role model for preserving the integrity and tradition of equestrian sport. “This award is very special to me because the recipient of this award pays it forward both in and out of the show ring,” says Rube. Steege received an elegant leather duffel bag and wore a white rose corsage on her lapel throughout the handy round to signify her achievement.

The Shapley’s Champion Groom Award for the best turnout in the class was presented to Erica Mckeever, mother and groom for Baylee Mckeever and Salvatore who were the 12th place finishers in the $20,000 WEC Hunter Derby 3’6″-3’9″. Shapley’s is a proud sponsor of the World Equestrian Center and is thrilled provide an award each week of the Winter Spectacular to the groom of the best turned out horse. Mckeever received a Shapley’s Award Bucket for Salvatore’s stunning turnout.