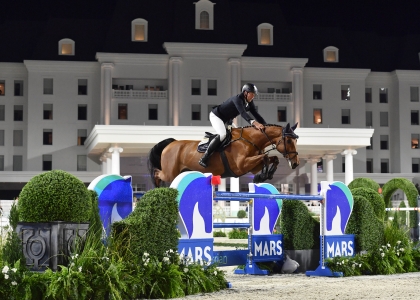 Ocala, FL – The highly anticipated $200,000 MARS Equestrian Grand Prix commenced on Saturday night with stands of the WEC Grand Arena packed with spectators for the finale of the 2022 Winter Spectacular Show Series. FEI Level III designer, Anderson Lima (BRA), renowned builder Bobby Murphy (USA) and Chris Barnard (USA) co-designed the technical tracks that featured stunning floral decorations and other whimsical elements including a stunning waterfall feature, a unique skinny wall and a stunning arch oxer between two ponds that made the last Saturday evening under the lights more grand than ever.

Fifty-seven athletes represented 12 different countries gathered at the WEC Grand Arena to try their hand at the intricate tracks where twelve found a fault free first round. The twelve returned, and seven yielded clean jump-off rounds, but it was Olympic rider Andre Thieme (GER) and his own Conacco (Conoglio x Chacco Osiris) that earned a sweet victory.

Geoffrey Galant, Vice President of MARS Equestrian spoke about the night, “It was a great evening. You couldn’t pick a better night with a better venue for MARS Incorporated. The night showcased all of our brands that we bring to life, Buckeye Nutrition on the horse side and our lovely Ethel M. Chocolates. We couldn’t be more proud to be here tonight as the title sponsor.”

Thieme and Conacco were one of the last few pairs down the ramp into the WEC Grand Arena, generating a superb first round in 84.217 seconds, just within the time allowed of 86 seconds.

Thieme took his hat off to the course designers, “There were nearly 60 horses in the class, and knowing that the course designer couldn’t build the track any larger, I knew that this course was going to be a tough job to do it right. The course was technical enough, had a perfect time allowed that made you have to hussle, it was big and spooky. In the end, 12 clear rounds out of 60 is the perfect result.”

Thieme and the talented 11-year-old Oldenburg gelding were the last pair to return for the jump-off, “I watched everybody on the big screen in the schooling area, so I was able to count their strides and watch their tracks. I saw Sharn [Wordley] go and I thought I was going to need to do the inside turn to the yellow stone combination. I went into the ring and told myself, that was the plan. Then, I caught jumps one, two and three nice and I made the decision to go around. I did do one less from one to two and to the green vertical in the middle. I also think I left out a stride to the large oxer at the end.”

Thieme and Conacco soared over the final MARS Equestrian oxer to stop the timers at 42.368 seconds to snag the victory.

“I have done two grands prix here this season with the same horse, knowing that I wanted to do this class. When I first showed him in this arena, he was very impressed by it all, so I knew what I was coming into tonight,” said Thieme. “I had the privilege of going to the Olympics this past year and I have to say, this is the only other place that I remember having a venue like the Olympics. The jumps, lights, décor and water features are all just so impressive. It is an incredible feeling to show here. I am beyond thrilled that my horse who is not that experienced yet, took it that well and did such an amazing job tonight.”

Second place of the $200,000 MARS Equestrian Grand Prix was earned by Molly Ashe and Louisburg Farm’s Berdien (Bustique x Queen Z). Ashe and the 11-year-old Zangersheide mare created a seamless first round in 82.106 seconds. Ashe and the stunning Berdien returned for the jump-off, soaring from fence one to two, to roll to the waterfall oxer. The pair quickly rolled back to the tall vertical to gallop to the double combination. Ashe and Berdien soared over the last oxer to stop the clock at 44.751 seconds, to ultimately earn second place.

Ashe was very proud of Berdien, “Berdien has been here six times and she’s been second place in four grands prix,” laughed Ashe. “Second seems to be our placing, but she is such a fighter and really tries for me. I am so proud of her tonight.”

Sharn Wordley (NZL) and his own Casper (Contender x Falubet) rounded out the top three in the $200,000 MARS Equestrian Grand Prix. Wordley was very impressed by Saturday’s courses, “There were quite a few challenging aspects to the course tonight. The skinny on the end of the ring is always a challenge right next to the VIP section. Once you get through that you can breathe a bit. The line from the wall to the oxer was pretty tricky. Casper never spooks, but he had a little look and I really had to ride at that oxer. A rail could come down at any point.”

Wordley and the 16-year-old Oldenburg gelding were one of the first three pathfinders of the first round, navigating a flawless track in 83.702 seconds. The pair returned for the short course, galloping from fence to fence, while taking tidy turns to stop the timers at 44.751 seconds to eventually secure the third place spot.

Santiago Lambre & All In Horses Cava received the $5,000 fastest four-faulter award in the $200,000 MARS Equestrian Grand Prix, producing a time of 80.346 seconds with one down.

Since 2011, NSBA riders have been inducted into the Quarter Million Dollar Club when he or she accrues earnings totaling $250,000 or more. On Saturday, NSBA recognized Tracy Fenney, Santiago Lambre and Sharn Wordley before the start of the $200,000 MARS Equestrian Grand Prix that have earned this prestigious level in just two years of NSBA competition.

Congratulations to everyone on such a great night. Congratulation to the Roberts Family and this wonderful facility and we are proud to be here and help support events like this.