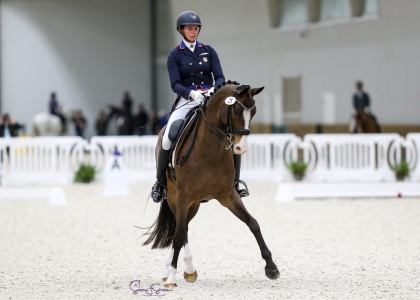 “I only had him for a few months before I had Mae, so I was getting to know him while very pregnant,” explained Marek, who is based near Ocala. “He’s such a fun horse to ride, and it’s incredible to be able to go into I-2 without knowing each other that well. It’s so fun as he can do all the grand prix stuff, even though I feel I’m experimenting a bit each time I put the test together.”

Snoopy Sunday is entering his third season at grand prix level, and Marek is focusing on consolidating the quality of the work now that the 13-year-old, by the Sandro Hit son Sungold, understands it all.

“My trainer Anne Gribbons always tells me to be patient when horses start grand prix, so we’ve been slowly bringing Snoopy up the ranks and perfecting the work,” said the 32-year-old, who co-owns the horse with Wendy Mantell. “He’s not the biggest mover, but he’s such a good boy and he’s really talented for the hard stuff.”

Marek’s own horses, Holiday and Donauwelle P, each delivered a win and a second place, all with plus-70% scores. Both horses came to Marek in unusual ways.

She explained, “Holiday used to be owned by Wendy, and he came in for training as a four-year-old. I asked the man I was working for at the time if I should trade my grand prix horse Unico for Holiday, and he said yes, so I did.

“The last couple of shows I’ve done with Holiday have been at I-2, but he has some growing up to do, so I dropped him back to I-1 here to get his confidence,” continued Marek. “He went so well that I decided to go for the I-2 on Saturday, and he was great.”

Marek noted the differences between her two own horses.

“Holiday is a very laid-back guy and a big horse, with a great walk,” she said of the 10-year-old by Bojengel. “He’s so talented but I have to take time with him; because of his size it takes a long time to gain strength. ‘Donnie’ [Donauwelle P] is the opposite of Holiday. He’s always buzzing and he can’t focus on anything, but I am so proud of him because these were his second and third Prix St. Georges classes, and he’s never scored under 70% at the level.”

Marek also noted that she rode Donauwelle P’s mother when she was carrying Donnie in a mare performance test. Donnie came to her as a three-year-old.

Marek is delighted to be back competing and to have the World Equestrian Center – Ocala on her doorstep: “Being able to show at this facility is amazing,” she said. “I’m so grateful to Adrienne Owen for keeping the horses fit for me so I was able to get back on when I was ready. I’m so lucky to have family around the corner from the facility as well as the support of the team at Next Level Farm who look after all my horses so I can do this with Mae.”

Marek has handed the reins of her long-time international grand prix ride Dee Clair over to owner Diane Morrison’s daughter Caroline Stevenson and is coaching the pair, but she is not short of talented rides.

﻿“It’s so exciting to have all these horses coming through,” concluded Marek. “Especially as a few months ago I’d never even ridden Fire Fly. Another mare I have, Felissirana, has just moved up to I-2. These horses wouldn’t be doing what they’re doing without Anne’s help. It really does take a village – especially with the kiddos.”

Adult Amateur competitor Erin Walker contested six Fourth Level tests on her two Hanoverians, Hotspot 7 and the stallion Diamond Rex 2, a 17-year-old former under-25 international grand prix horse under Germany’s Sophia Funke. She was on the podium in every test.

Busy riders were richly rewarded at this show, with U.S. Eventing Olympian William Coleman riding six tests and winning all but one of them. He was unbeaten on three of his four horses, with his top scores coming from his four-star horse, the jumping-bred Chin Tonic HS. Hyperion Stud’s 10-year-old son of Chin Champ scored 72.432% and 75.75% at Third Level.

Cold Red Rum, a nine-year-old by Cassone, and Off The Record, an Irish Sport Horse by VDL Arkansas, were both undefeated with plus-70% scores.

Cold Red Rum, by Cassone, was formerly competed by German Olympian Dirk Schrade, while Off The Record won both the CCI4* at Raeford, North Carolina, and the CCIO4* at Aachen, Germany, in the 2021 season with Coleman in the saddle.

The pair claimed four wins from six starts at Third Level, with the 17-year-old piloting the former reining horse to a high score of 74.6% in the freestyle.