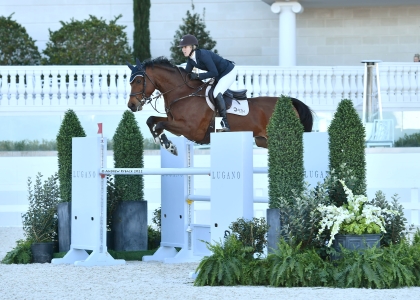 Douglas and MTM Pablo were the last pair down the ramp into the WEC Grand Arena, producing a faultless first round in 75.201 seconds. Douglas found the class to be very helpful for MTM Pablo, “We are using this class and the Futures Prix to bring this horse along. We have been stepping him up now that he is nine this year. This course was a great middle ground, it was more difficult than the Futures Prix but not as difficult as Saturday night.”

Douglas and MTM Pablo advanced straight to the jump-off, with the goal of delivering a smooth round. The pair started on a nice gallop to flow seamlessly through the first half of the course. Douglas and MTM Pablo elected to do a tight inside turn after the Liverpool vertical that no other competitor attempted. “I wasn’t really planning on the inside turn, but I met the vertical already turning back to the right and Pablo felt careful, smart and like he was right there with me. So, at that split second it felt like the right thing to do.”

The pair flew through the last line, stopping the clock at 43.384 seconds for the win.

Brazil’s Santiago Lambre and Cetano Van Aspergem Z (Altamira Z x Clinton) captured second place in today’s $15,000 WEC Ocala 1.45m Jumper Classic. Lambre and the 13-year-old Zangershiede gelding delivered a fast first round stopping the clock at 74.467 seconds, well within the time allowed of 77 seconds. The pair jumped-off immediately, galloping through the entire course not pumping the brakes once to stop the jump-off timers at 44.599 seconds.