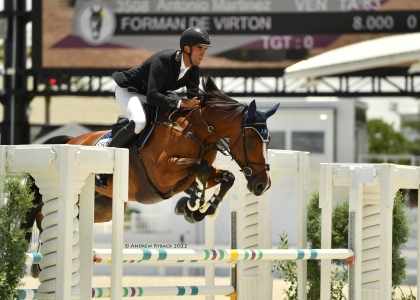 “I have had Forman De Virton for a while. He was off for about a year with a small injury, but thankfully he came out just fine. He always jumps his heart out and tries his best. He’s a kind-hearted horse that loves to be in the ring.”

Martinez had a switch of plans after he watched some competitors try an inside turn in the jump-off, “A lot of people struggled with that inside turn to the double combination, when I walked it, I thought that was the route to take, but thankfully I was late in the order and was able to watch some people try it.”

Martinez and the speedy Forman De Virton galloped around the course, leaving out a stride in the last line to stop the clock at 30.637 seconds.

“When I jumped into the last bending line, he drifted right which landed us on the inside track to the last fence and the leave out was right there,” said Martinez. “In the end, it was a great class with really talented competitors. The course was challenging and technical, but not challenging to where the horses have a bad experience. I think that is the most important part for a course.”

Second place was captured by Luiz Larrazabal (VEN) and Victoria Heurtematte’s Hareina (Spartacus TN x Careina). Larrazabal and the 10-year-old KWPN mare were just behind the winning pair, with a jump-off time of 30.740 seconds.

Only seven contenders were able to leave all the rails up in the first round and five managed to jump double clear.

Michan and the 10-year-old Selle Francais mare were the fastest of the five double clean rides, “I watched the current leader, Luis Biraben and he went very fast, so I knew the only way to catch him was to go flat on and the mare was right with me.” The pair flew around the short course in 33.578 seconds, shaving nearly three seconds off the current leader, Luis Biraben’s time.

Comedie De Talma is a new mount for Michan, “I just got her three-weeks ago from Ilan Ferder Stables and Esperanza Imports. I was in need of an extra horse to jump the Major League Tour that I am doing. She is an incredible horse with a lot of experience. I am very excited to continue riding her.”

Second place was snatched by Tanimara Macari and her own Starfly   (Starpower x Safrane De Messitert). Macari and the nine-year-old Warmblood mare soared around the course in 34.727 seconds, to claim the second place spot on the leaderboard.