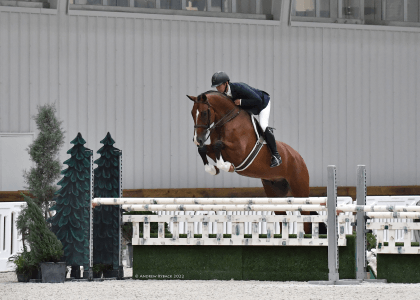 This week’s Ocala Sunday Spotlight shines on 2021 National Equestrian of the Year Hunt Tosh of Milton, Georgia. Tosh has earned a full list of victories at the most prestigious hunter competitions in the country including last year’s 2021 USHJA International Hunter Derby Championship, where Tosh and The Wheeler Family’s Cannon Creek dominated the field of 88 entries. We caught up with Tosh to learn more about his achievements and two of his top mounts.

I began riding at an early age, where I showed locally in Atlanta, Georgia. As a teenager, I worked for Roger and Judy Young for several years. Then, Dennis Mitchell and Dennis Murphy took me under their wing as a working student.

I began riding hunters with Jack Towell while his daughter Liza was in college. Honestly, I have been able to work with so many amazing people, there are too many to name.

I slowly began my business at the age of 18 or 19 years old. The focus was on sale horses. I still did a decent amount of catch riding, but my business early on had a concentrate on buying and selling horses.

About 15 years ago, Betsee Parker and the Wheeler Family came into my world, and we started to do horses together. That’s where we are today.

WEC: When did you begin riding Cannon Creek?

We purchased Cannon Creek in Florida last year. Emil Spadone imported him, and Cassie Kahle showed him the last two weeks of HITS winter circuit. I told the Wheeler Family that he would make a fantastic derby horse and he reminded me so much of my old derby horse Lonestar. That was the beginning of our career together.

My first show with him was in May of last year at Aiken. It was an immediate connection. Shortly after we were winning the USHJA International Hunter Derby Championship in Kentucky. When I won Derby Finals on Cannon Creek, it was 11 years to the day that I won the same class on Lonestar. My daughter, Maddie ended up showing me a side-by-side image of Lonestar and Cannon Creek and they almost looked identical.

After Derby Finals, he went on to show at Harrisburg where he was Grand Champion with a clean sweep in the High Performance Hunter over fences. Then, we went onto Capital Challenge where he was reserve. At the end of the year, he was named 2021 US Equestrian Horse of the Year.

His scope and form are just fabulous. He has that classic hunter style, but with endless scope. He was doing the 1.40m Jumpers in Europe before Emil Spadone and Paul Hendrix imported him. I fell in love with him the first time I saw him.

WEC: Tell us about Autograph.

We bought Autograph from Emil Spadone as well. Autograph ended up being a little bit of a victim to covid where he didn’t show that often. Once we were finally able to get showing, he was Champion at several of the indoor shows as a second-year horse. He was wonderful at Indoors and really just stood out. He can be a little quirky about some things, but overall, he is an incredible horse with amazing scope. Recently, he has been coming into his own and getting better with each ride.

Just a few months ago, he won the $25,000 USHJA International Hunter Derby at the Devon Horse Show. At that point he hadn’t done a lot of derbies, but he really showed off what he could do.

WEC: Where are you off to next?

After that we head to Indoors, then get a little break where hopefully we will be back here for the Winter Spectacular show series.

WEC: How has your experience been at World Equestrian Center – Ocala?

We absolutely love it. I remember walking around when this was just a cow pasture. The vision that the Roberts family and Vinnie had, sounded incredible, and now with it actually being here, it is unimaginable. Even when we weren’t showing we would come over to watch the derbies, grand prix and have a nice dinner. It is truly such an incredible venue that offers everything that you could every need.

Thank you, Hunt, for taking the time to chat with us! We wish you all the best of luck at Derby Finals!