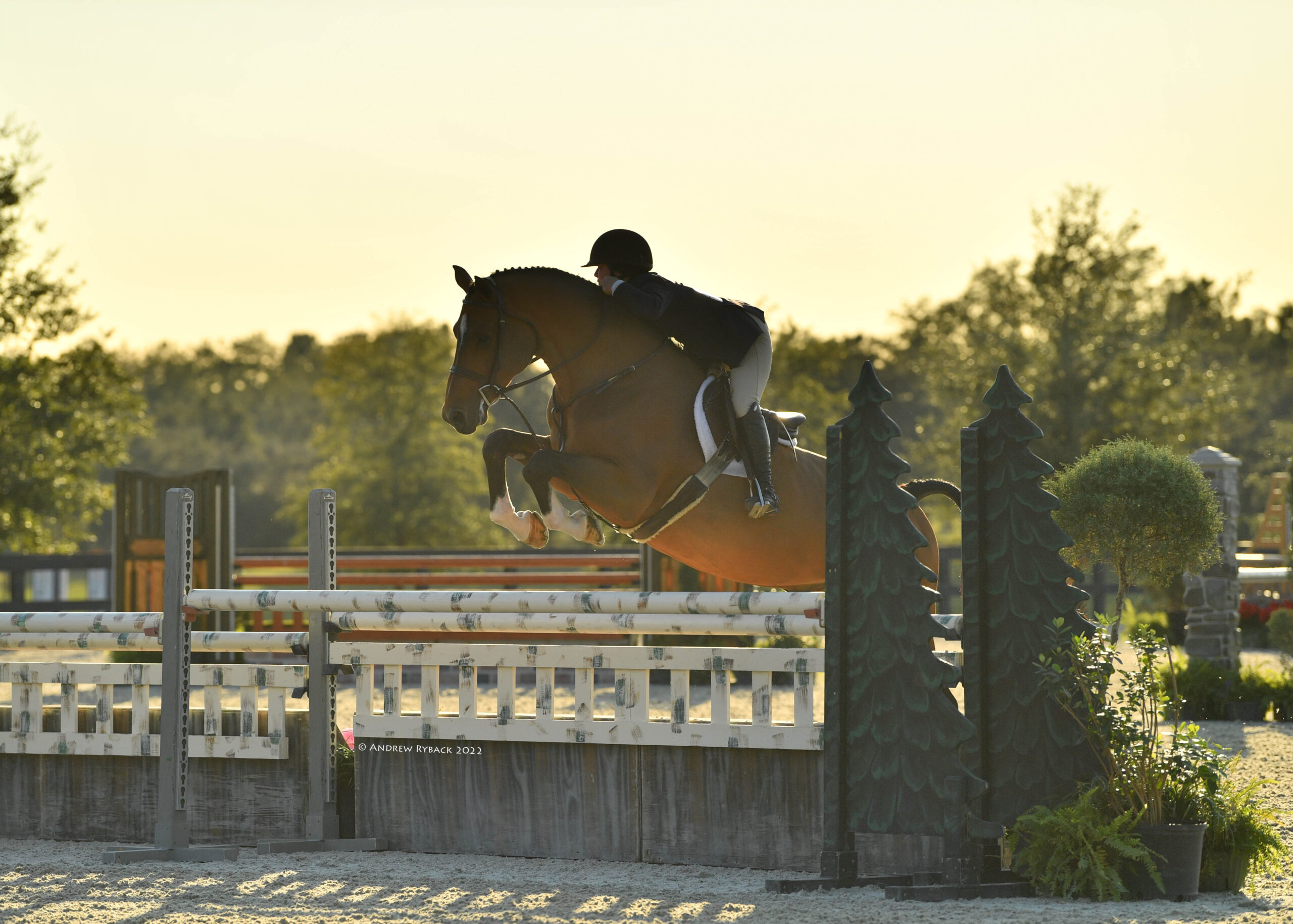 The pair entered Hunter 1 toward the end of the order navigating a textbook round to secure a score of 91.

Iwasaki and Attendu De Lannois Z were the last pair to return for the handy, “We planned to do the inside turn after the high option oxer when we walked the course. ‘Attendu’ is very handy and excels in the derbies, so I knew the turn wasn’t going to be a problem for him,” told Iwasaki.

The pair floated around the handy track taking every inside turn offered while jumping all four high options to earn a high score of 96 for a two-round total of 187 for the win.

Iwasaki spoke about the talented gelding, “Attendu is such a fun horse to ride. I have been showing him in the derbies for almost two years now. I am excited to continue to show him and I am looking forward to coming back this winter.”

Twenty gorgeous horse-and-rider combinations gathered at Hunter 1 early this morning to vie for the lion’s share of the prize money, but it was Kate Conover and Cover (Coolidge x Zeruta) that snagged an overall score that was nine points higher than second place.

Conover and the ten-year-old Holsteiner gelding found an effortless first round to secure a high score of 92.

Conover spoke about the first-round track, “It was a nice open course. I am not a stride counter, so the unrelated distances worked out well for me. I only ever had to count to two,” laughed Conover. “Everything rode out of a gallop, and it was nice to end on a single oxer.”

Cover is a very special horse to Conover, “I showed ‘Cover’ as a first-year horse back in 2020. I used to ride him for Carol Stillwell with guidance from Bill Ellis and David Connors. Then he was sold to California and just came back into my life. Makoto Farms and Don Stewart gave me the ride on him, and it has brought back so many amazing memories of Bill who sadly passed away last year,” said Conover. “Bill Ellis gave me this jacket that I am wearing today, so it felt like he was with us and watching over us.”

Conover and Cover returned to the handy on top, “Fence one was a bit awkward, you really needed to land left to get to the second jump smoothly, so I decided to start out on a right track. I knew if I went right, I could easily land left, and it all worked out from there.”

The pair navigated a superb handy round, jumping all four high options with ease to receive a score of 95 for a two-round total of 187.

The $10,000 WEC Ocala 3’ Jr/Am Hunter Derby played host to 33 competitive hunter riders, but it was Mary Beth McGee and her own C-Star that snagged their second consecutive win with two scores in the high 80s.

McGee and the 13-year-old Hanoverian gelding produced a smooth first round to earn a score of 87.

McGee spoke about the consistent gelding, “He is incredible and super brave. We went up to New England this Summer and he won the New England Finals. We just came back down to start getting ready for the winter circuit,” stated McGee. “It’s an amazing start so far. I am excited to compete in the Stadium this winter. I competed in that arena once with him last winter and had a blast.”

The pair returned to the handy with some points to make up, “I was third coming back, so I knew I had to risk some inside turns to win. C-Star is surprisingly very handy for being an 18hh horse with a giant stride, but he is soft in the bridle, you just need to look where you want to go and he is right there with you.”

McGee and C-Star galloped around the handy track, taking each inside turn available for a score of 89 and an overall score of 176 for the victory.