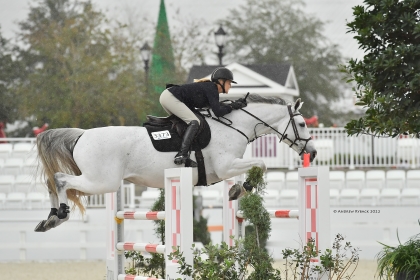 Nine horse-and-rider combinations managed to keep all rails up and stay under the time allowed of 80 seconds in the first round to qualify for the immediate jump-off. Each pair excelled over the short course, finding the path to yet another clean round.

Kristen Vanderveen (USA) and Bull Run Jumpers Five LLC’s Bull Run’s Faustino De Tili (Berlin x Bijou Van De Vijfheide) were the pathfinders in the first round and the first pair to advance to the jump-off. Vanderveen and the 17-year-old Belgian Warmblood stallion flew around the jump-off track, not pumping the brakes once to stop the clock at 38.073 seconds, setting the pace for the remainder of the class.

Numerous horse-and-rider combinations tried to best Vanderveen’s time, but none were able to catch their speed, until Tracy Fenney and MTM Farm’s MTM Apple entered the arena.

Fenney spoke about today’s first round track, “It was a nice course, there were a few options when it came to striding. I ended up leaving out a stride after the first double combination. I landed and thought I would just roll away, but I ended up walking down the line in a six. After I landed, I was pretty sure that was supposed to be a seven,” laughed Fenney.

Fenney changed her plan right before the jump-off to win, “I wasn’t planning on doing the inside turn after fence one, but after I finished the first round, I went to take a look and I knew Apple could do it. I thought it was the only way to beat Kristen [Vanderveen] without running like a crazy person because her horse is so quick across and off the ground,” said Fenney.

“I stayed out as far as I could to fence one to catch a right slice, so I could easily roll back to the red oxer. Then I was able to go inside to the skinny and found the rest on a nice gallop.”

Fenney and MTM Apple soared around the track in an unbeatable 36.653 seconds.

Third place was secured toward the end of the order by Richard Spooner (USA) and Molly Ohrstrom’s Halcon. Spooner and the extremely talented six-year-old Argentinian Sport Horse stallion are coming off back-to-back wins in the $15,000 Buckeye Nutrition Futures Prix. Today, the pair continued their successful path after navigating an efficient jump-off in 40.035 seconds to round out the top three.