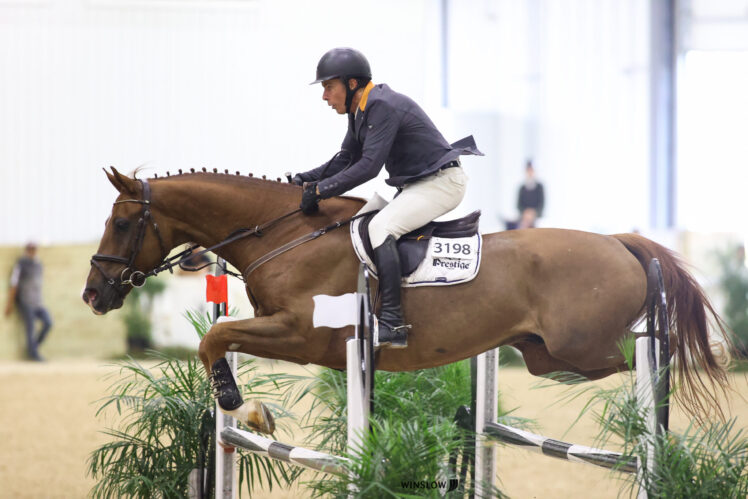 An enthusiastic crowd filled the Sanctuary Arena stands this afternoon for feature jumper action including the Futures Prix 1.30m, followed by the WEC Grand Prix. Fans cheered for their favorite horse and rider combinations as they tackled the courses in hopes of a big win.

Nineteen entries took on the evening’s Grand Prix course, which had a time allowed of eighty seconds in the first round and just fifty seconds for the jump off. Courses for the Grand and Futures Prix classes were designed by Bobby Murphy and challenged many riders’ technical abilities throughout the two classes.

Wilhelm Genn stole the show with an incredible win in the $30,000 World Equestrian Center Grand Prix aboard his own Van Gogh. He also won Thursday evenings $10,000 Welcome Stake on this talented mount.

We caught up with Wilhelm after his big win to talk about how Van Gogh negotiated the course and his warm up routine.

“Winning never gets old! I am super happy with our ride. I started a different warm up routine with him after a mishap a few weeks ago and the new routine gives him so much confidence now. We don’t jump any oxers now in the warmup ring, just strictly gymnastics and it has made such a difference for his confidence.”

Genn and Van Gogh crossed the timers in the first round at just 77.39. The pair blazed through the jump off with a clear round in 45.613, nearly four seconds ahead of the second place finisher.

The $10,000 World Equestrian Center Futures Prix 1.30m saw a field of twenty-horse and-rider combinations vie for the win, but it was Uranus 112 and Richard Rinehart, riding for owner Caron Stucky, who won big.

First on the course and taking the win, was Uranus 112 (Uccello x Conny), a nine-year-old Oldenburg gelding. Rinehart jumped to win with a first round time of 68.869 seconds, followed with a fantastic jump off time of just 27.581 seconds.

“I really enjoy showing Uranus 112 for Caron. This is his second Futures Prix win here. I’m looking forward to coming back to WEC in October to show him again.”

Captain America, also piloted by Richard Rinehart, was just .2 seconds behind Uranus 112. The seven-year-old, Captain America and Rinehart ran a clean 70.282 seconds in the first round, and soared over the jumps, double clean, in the jump off at 27.759 seconds.

Rounding out the top three, Alexis P. Bodo and Select’s London Calling Old (London x Walmeria II) jumped double clear, advancing to the jump off in 69.724 seconds. The duo followed that with a jump off time of 28.948 to slide into third place.