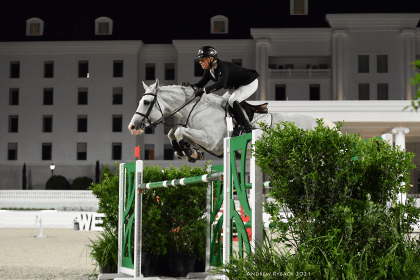 The WEC Grand Arena hosted another exhilarating Saturday night grand prix as 39 entries vied for the win in the $75,000 Stella Artois Grand Prix brought to you by Tri-Eagle Sales. FEI Level III course designer, Catsy Cruz, designed the technical tracks that included a tricky triple combination and double combination that tested multiple riders throughout the night. Eight entries achieved a clean first round and four jumped double clear, but it was Olympic rider, Sharn Wordley that captured both, first and second place in Saturday night’s $75,000 Stella Artois Grand Prix.

New Zealand’s Wordley completed his first clean round aboard his own Casper. The pair had a recent win just last week in Sunday’s $15,000 WEC Ocala 1.40m Jumper Classic. Wordley and the 15-year-old Oldenburg gelding delivered a smooth and clean first round, stopping the clock at 75.193 seconds.

Wordley came back to the WEC Grand Arena toward the end of the order with his second clean round ride, Gatsby (Simba x Daisy Cruise). Wordley and Gatsby have had previous success during the World Equestrian Center – Ocala Winter Spectacular earning a grand prix win. The pair also earned fifth place in last week’s grand prix. Wordley and the 17-year-old Irish Sport Horse stallion delivered a very fast and clean first round stopping the clock at 71.735 seconds, well under the time allowed of 77 seconds.

Wordley first returned back to the jump-off with Casper and had a plan, “I wanted to go fast but not crazy fast. I wanted to go fast enough to put the pressure on but still keep all the jumps up. Casper had some time off after the winter circuit, so this was his first grand prix back. I was being a bit more conservative because I knew I still had Gatsby who is quicker.”

Wordley first returned to the jump-off on Casper (Contender x Falubet). The pair started off on a nice gallop to fence one then rolled back to the vertical in eight strides to gallop to the double combination. Wordley and Casper soared over the oxer and galloped to the last bending line, leaving out a stride to stop the clock at 36.782 seconds, setting the pace for the remainder of the jump-off.

Multiple riders challenged Wordley and Casper’s time, but none could capture the speed until Wordley returned on Gatsby. Wordley and Gatsby were the second to last pair to return to the jump-off. Wordley rode the jump-off on Gatsby similar to how he rode the course on Casper, “I did the same exact striding on both horses, and there ended up being four hundredths of a second between them.” Wordley and Gatsby flew through the course soaring to the top of the standards to stop the clock at 36.747 seconds for the win.

Third place honors went to Peter Petschenig of Pilot Point, Texas, and Wannabe CS (Warrant x Welite). Petschenig and Wannabe CS were the second entry in Saturday night’s $75,000 Stella Artois Grand Prix to deliver a clean first round, stopping the clock at 75.097 seconds. The pair returned to the jump-off taking a nice tight turn back to fence two to gallop through the rest of the course, stopping the clock at 38.512 seconds.

An additional $5,000 was awarded to the fastest four-faulter of the $75,000 Stella Artois Grand Prix. It was Spain’s Diego Bilbao and Tinker Bell who received a very fast first round time of 71.200 seconds. Bilbao and Tinker Bell have had great success during the World Equestrian Center – Ocala Summer Series earning first place in Week V’s $15,000 WEC Ocala 1.40m Jumper Classic and $15,000 WEC Ocala Welcome Prix.

The non-award winning entry that received the Luck of the Draw $5,000 prize was Callan Solem and Essenar Crixus.