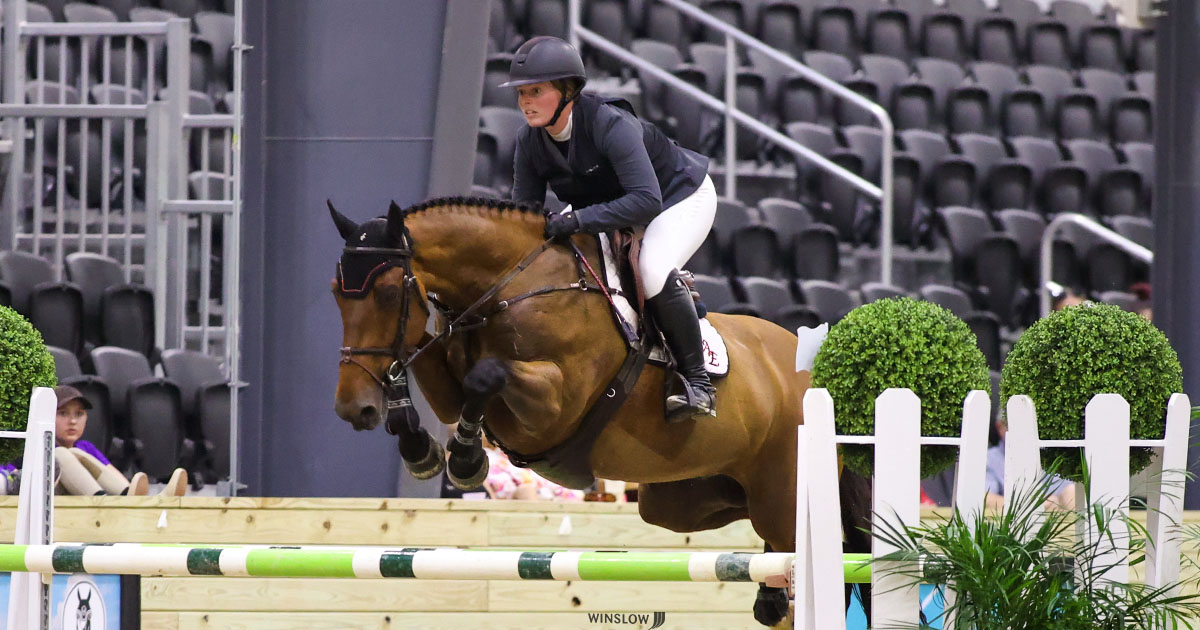 Seventeen elite horse and rider combinations gathered in the Sanctuary Arena for an action-packed afternoon of showjumping at World Equestrian Center – Wilmington; all vying for the win in the $30,000 WEC Grand Prix over a course designed by Bobby Murphy of Lexington, Kentucky.

Ten horses qualified for the jump off, but it was Kady Abrahamson of Abrahamson Equestrian LLC, Georgetown, Kentucky, and Banco Du Moulin (Popstar Lozonais x Gerboise Du Moulin) who prevailed to take the win.

“This girl is on fire!” exclaimed Keely O’Hara, a friend of Abrahamson’s. Banco Du Moulin, now owned by Abrahamson Equestrian LLC, is a newer mount for Abrahamson. She and the 10-year-old Selle Francais gelding began riding together only five months ago. Time is no object for this team, as they notched wins in two $20,000 Welcome Prix classes during the Winter Spectacular at WEC Ocala. Now the pair is adding a $30,000 WEC Grand Prix win to their list of accomplishments.

“I didn’t go as fast with him last weekend…Today I knew that I didn’t want to be second again – so we just did it!”

Abrahamson and Banco Du Moulin jumped the first round clear in 73.416 seconds, securing their spot in the jump off where they stopped the clock at an unbeatable 35.070 seconds.

Wilhelm Genn and Bugatti (Heartbreaker x Nona Bella ) took second place in the $30,000 WEC Grand Prix. Genn, of Rheinland Farm in Lebanon, Ohio, and Bugatti, a 15-year-old KWPN gelding owned by Eduardo Leon, stopped the clock at 35.922 seconds in the jump off.

A contending field of 16 jumpers took the Sanctuary Arena at the World Equestrian Center Saturday for the $10,000 Futures Prix 1.30m.

Six riders qualified for the jump off, with three of which delivered fault-free rounds. The fastest of the rounds was David Beisel and Vegas H, who topped the class with a jump off time of 36.599 seconds.

David Beisel is no stranger to the winner’s circle at the World Equestrian Center. Beisel piloted his own Vegas H (Valentino x Cobrah), an eight-year-old Warmblood, to his second WEC Futures victory. We caught up with Beisel of David Beisel Stables, Goshen, Ohio, to chat about today’s Futures Prix win, “He is so fast and light on his toes. He steers so well, for a big horse you can make surprisingly tight turns on him.”

Congratulations to all on a great day of equestrian sport. Competition continues at World Equestrian Center – Ohio through Sunday.