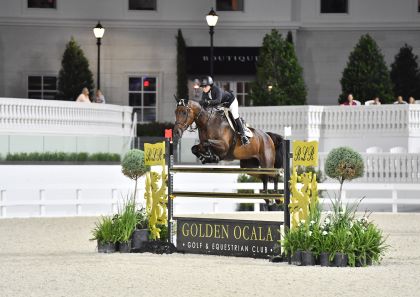 There were 44 entries in Saturday evening’s $50,000 Golden Ocala Golf & Equestrian Club and Royal Shell Real Estate Grand Prix that competed under the lights in the WEC Grand Arena. FEI Level 3 course designer Manuel Esparza of Mexico, who has assisted in five Olympic Games, designed the technical tracks for the classes, which featured difficult combinations, with a jump-off course that called for complete accuracy.

Esparza’s first-round course included a triple bar double combination and a triple combination, challenging riders throughout the course. Sixteen of the horse-and-rider pairs went clear in the first round, allowing them to return for the jump-off, but it was junior rider Catalina Peralta and Wendy Peralta’s Conti (Contender x Patina IV) who captured the win.

Recounting her plan for the jump-off, Peralta said, “The amount [of riders in the jump-off] really just made me think that there was nothing to lose. If I had a rail in the class, it’s not going to be the end of the world. I’m going to give it my all.”

Peralta and the 15-year-old Holsteiner gelding started the jump-off strong with a left short turn to fence one. “We walked eight [strides] from the first jump to the second jump in the jump-off, but in order to leave out the stride that I wanted, I had to get a better angle from left to right,” explained Peralta.

Conti and Peralta galloped through the rest of the course, stopping the timers at 37.648 seconds, more than 1.5 seconds faster than the second-place finishers, Camille Maddrix and Jack Straw.

Peralta had some family competition in the class. Her father, Ezequiel Peralta, joined her in the jump-off on Casilias, owned by Second Life Z. “I have competed against my dad in a jump-off many times before!” said Catalina Peralta. “The last show we went to, he beat me, so I wanted to beat him this time.”

This is Peralta’s last junior year and first time ever winning a Grand Prix. “It’s so exciting,” she remarked. “It feels pretty good. It’s a bit surreal. I’ve had this horse for so long. To make that next step in my career with him is very special.”

Camille Maddrix of Ocala, FL, and Jack Straw, M&M Sporthorses’ 11-year-old Selle Francais gelding (Quatro De Riverland x Jonquille D’Elle), were just behind Peralta and Conti for second place. In the jump off, the pair opted for inside turns and a forward distance to the Golden Ocala Golf & Equestrian Club fence, making for a beautiful and quick line, stopping the timers at 39.326 seconds.

Hayley Waters of Sparr, FL, and Just Luck, a 12-year-old warmblood gelding owned by Chuck Waters, rounded out the top three placings in this evening’s $50,000 Golden Ocala Golf & Equestrian Club and Royal Shell Real Estate Grand Prix. Waters and Just Luck completed a lovely first round, and when they returned for the jump-off, a sharp slice over the Lugano oxer, made for a quick turn back to the Golden Ocala Golf & Equestrian Club vertical, securing third place.

Earlier on Saturday afternoon, the WEC Grand Arena hosted 20 horse-and-rider combinations for the $7,500 Futures Prix 1.30m – 1.35m. Seven pairs qualified for the jump-off, and it was Karl Beyer and Hannah Matts’s Emeraldo, an eight-year-old Warmblood gelding, who took the win in the class.

Beyer rode I Adermie R 4, an eight-year-old Dutch Warmblood mare (Den Ham Blue R x Waderie 1) earlier in the class and also qualified for the jump-off. A friend sent the horse to Beyer, who described it as “a bit marish, but can ride a track like no other horse.”

He continued, “I was really planning on winning with her. So, I thought [about Emeraldo], ‘Come on buddy, you have to help me out.’ He did, so I am very happy.”

Beyer and Emeraldo stayed in the WEC Grand Arena after their first round to contest the second round course immediately. With tight turns and forward distances, Beyer and Emeraldo stopped the clock at 36.410 seconds for the win. Beyer described, “He is so scopey, and he’s incredibly bred. He’s meant to be an amazing horse.”

Gemma Paternoster of Loxahatchee Groves, FL, and Terri Brent Stables and Cynthia Gordon’s Charming Force B delivered a flawless first round. After completing her first-round course, Paternoster jumped off immediately, to earn second place in a time of 36.878 seconds.