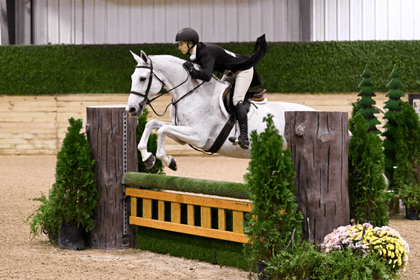 Eighteen professional hunter athletes made flawless efforts over Carnicom’s track, each hoping to find themselves in the winner’s circle at the conclusion of the highly anticipated class. In the end, it was Catherine Rinehart and Chablis 162 that impressed the judges with their classic hunter style in the $10,000 USHJA National 3’ Open Hunter Derby.

Rinehart of Rinehart Farm in Westfield, Indiana rode the 12-year-old Holsteiner mare owned by her son, Luke Rinehart, to a gorgeous first round, earning a score of 89 in a competitive group of experienced hunter athletes. “She is my son’s horse and I have never shown her. It took me a few jumps to figure out what to do, but the less you do the better she is. It was very fun to do this today.”

The duo came back for the handy round in second place, sitting behind Kelsey Epperson with a score of 91. Rinehart laid down a near perfect round, earning a score of 92 for an overall score of 181. Not only did Rinehart claim top honors, but she also took home the red ribbon aboard Luke Rinehart’s Hero.

The $10,000 USHJA National 3’ Non-Pro Hunter Derby saw a field of 26 horse-and-rider combinations, but none could catch Owen Gajoch’s impressive scores aboard his very own Breathless.

Gajoch piloted his new nine-year-old KWPN gelding to an effortless first round score of 88.

“It was only our fourth or fifth derby together. We have only had him for three months now. We threw up some high scores at GLEF [Great Lakes Equestrian Festival] in some tremendous crowds, so the future definitely looks bright.”

Gajoch and Breathless were the last pair to return for the handy round. To ensure a faultless effort, Gajoch stuck to a conservative plan that would better suit his mount. The duo did just that and scored an 89 for an overall high score of 177.

“I tried to get a better round out of him in the handy because he was a little bit playful in the first round. I wanted to make it a little smoother and we did just that. I originally planned to do six strides in the bending line, but I went with seven strides instead. I didn’t want to risk anything,” comments Gajoch.

The young, talented amateur rider is familiar with World Equestrian Center – Wilmington as he trains just around the corner with Jennifer Nadalin out of Sugar Run Farm in Columbus, Ohio. Gajoch is wrapping up a successful fall series, just coming off a fourth-place finish in the prestigious Taylor Harris Insurance Services Adult Medal Final at the 2022 National Horse Show. He will also make his Grand Prix debut in tomorrow nights $30,000 WEC – Wilmington Grand Prix.