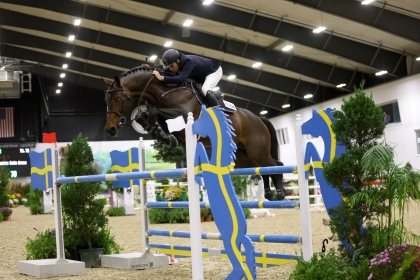 Wilmington, OH – The finale of the 2022 Fall Classic Show Series at World Equestrian Center – Wilmington came to an exhilarating close as 23 horse-and-rider combinations took to the Sanctuary Arena to compete for the lion’s share of the prize money in the $75,000 WEC Grand Prix. Santiago Lambre (BRA) continues to prove unstoppable as he rode his own Chacco Blue II (Chacco-blue x Naiti Rouge) to a fourth grand prix victory of the five-week series.

FEI Level III course designer Anderson Lima (MEX) crafted the elaborate track that featured a challenging triple combination which caught several riders throughout the first round.  A total of ten pairs qualified for the jump-off and seven managed a double clean effort. Competition was fierce in the jump-off, with the leader being swapped numerous times, until Santiago Lambre and Chacco Blue II posted a time that was simply uncatchable.

Lambre and the 15-year-old Oldenburg stallion were the fifth pair to return to the jump-off, “It was a fast class, so I knew I was going to have to be as quick as possible. [Chacco Blue II] has a big step, so he covered a lot of ground quickly and I was very tidy back to the vertical after the double combination.”

Lambre and Chacco Blue II soared to the top of the standards over the final fence stopping the clock at an unbeatable 33.715 seconds.

Lambre spoke about his success during the World Equestrian Center – Wilmington 2022 Fall Classic Show Series, “When you show at any World Equestrian Center venue you have to be as fast as possible. I am very proud of the horses for jumping so well the past couple of weeks. I think this was the perfect show to prep for the National Horse Show and I think Chacco Blue II and Casey are ready for the World Cup™.”

Lisa Goldman-Smolen (USA) and Barbara Disko’s Sovereign (Frontal x Galledent)  scored the second place spot on the leaderboard. Goldman-Smolen and the 16-year-old Selle Francais stallion were the second-to-last pair to return to the jump-off to challenge Lambre and Chacco Blue II’s quick time. Goldman-Smolen and Sovereign galloped to fence one after the tone, the pair easily left out a stride in the first line to roll back to fence three. They raced around the remainder of the course in 34.338 seconds, which landed them in the reserve spot.

Thursday’s Welcome Stake winners, Katherine Anne Brewer (USA) and her own Casido 2 (Cosido x Nele II) found the third fastest time in today’s $75,000 WEC Grand Prix. Brewer and the 13-year-old Holsteiner gelding streamlined the first line, galloping from fence one to two, landing right and racing to fence three. Brewer and Casido 2 then flew over the double combination and finished the rest of the course without shifting gears to stop the timers at 34.935 seconds.

Syquia and Justice negotiated a seamless first round in 78.243 seconds.

“Justice is a special horse. I actually rode her mom in some of the biggest classes I’ve ever done. We ended up having to stop showing her at a young age because of a cyst, so we decided to breed her. Justice was one of her first foals, and I have been riding her ever since she was four years old,” said Syquia. “I showed her in the five, six and seven year old classes and now we are doing the 1.40m classes. She is just like her mom and is already showing off her talents.”

The pair advanced straight to the jump-off, “I wanted to work on what didn’t go right in the Welcome Stake earlier in the week. She was a bit green to the liver pool, so I wanted to be a bit strong and not leave anything to chance. I ended up doing five strides in the last line, that no one else attempted, but I had the mind set to win because she deserved a victory.”

The pair swiftly flew around the  jump-off course not pumping the brakes once to stop the jump-off clock at 36.864 seconds.

The second place spot on the leaderboard was found by Campbell Brown and MMK Equestrian LLC’s Caiam D’ivraie (Dollar Dela Pierre x Jaliska De Tanues X). Brown and the ten-year-old Selle Francais gelding produced an efficient first round well under the time allowed of 84 seconds. The pair went straight to the jump-off at the sound of the tone, flying around the track in 37.525 seconds.

Taylor St. Jacques and her own Upsilon De La Liniere (Tinka’s Boy x Firenze Vh Waterschoot) galloped into third place. Jacques and the 14-year-old Selle Francais gelding navigated a seamless first round in 79.046 seconds to qualify for the jump-off toward the end of the order. The pair raced around the short course, taking tight turns to stop the timers at 38.143 seconds.