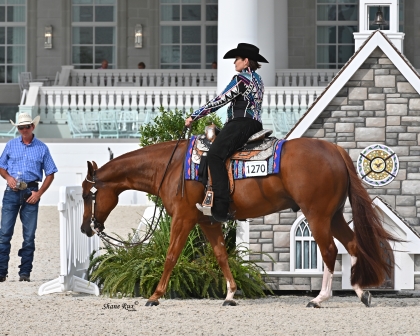 The 2021 Championship Show continues with thrilling equestrian competition. Wednesday marked the first day of Finals for Western Pleasure and Hunter Under Saddle. The WEC Grand Arena was packed with stunning horse and rider combinations striving for the win.

Competition kicked off early Wednesday morning with the Maturity Non Pro Limited Western Pleasure Finals where 50 horses competed for the top prize but it was Cynthia Kaufman from Westerville, Ohio and her own No Doubting Me that captured the win.

“It was a huge class, so I am still in shock. When I got first from all four judges I was completely stunned. I got a little teary eyed on the third because I knew we had the class. Going into a giant class like that with some of the biggest names our there is just super intimidating, but we did it,” said Kaufman.

“Everyone knows No Doubting Me. I just purchased him at the end of March, so he is still very new to me. I just got back to showing last year after a 30-year break, so this is just unbelievable. He’s taught me so much and I am so proud of him.”

Kaufman’s trainer Chad Piper was very happy with the pair, “Getting first from all four judges was fantastic. To be at a facility like this is just unbelievable. The Roberts truly thought of everything. It’s everything and then some,” said Piper.

Later Wednesday, Jamie Dowdy and Gumz Farms Quarter Horses LLC’s Perfectly Southern swept the Two Year Old Maiden Western Pleasure Limited finals. “Perfectly Southern is one of those super positive, happy horses to have around. He is just a good egg. Sometimes you need to tell him it’s not play time because it’s time to work but when he gets in that ring, he is amazing. He just floats and it’s like a dance,” expressed Dowdy.

Perfectly Southern’s owner has owned him all his life, “Perfectly Southern was an embryo transfer. I own both of his parents and he is just perfect. He was always very playful and wanted to please early on.”

Dowdy also received second place in the $2,500 Maturity Ltd Horse Western Pleasure Limited finals aboard Melissa K. Hendrix’s Southern Decadence. “She is a great little mare and just loves the show ring. She is probably the sweetest mare out there and she is so honest. I was so proud of her.”

The Two Year Old Hunter Under Saddle Limited finals was conquered by Kelby Hutchinson and Seaside Farm LP’s Shes Southern. “Shes Southern is by A Southern Thing, we got her in late February and didn’t start her until March. We didn’t know if we would even show her, but she wanted to be a show horse. She is pretty phenomenal and has a god given ability.”

In the last class of the day, Sara B. Simons and Dakota Andrie’s Never Have I Ever captured the win in the Junior Western Pleasure class.  “Madonna [Never Have I Ever] is a 4-year-old by No Doubt Im Lazy. She is owned by Dakota Andrie from Franklinville, New Jersey. She won the Youth World on her a couple months ago. Next year, we hope to add western riding, horsemanship, and trail. She is a super special horse and moved beautifully today,” said Simons.

Thursday was also filled with Finals for Western Pleasure and Hunter Under Saddle. The last class of the day had some intense competition as the top 20 finalists from the Maturity Non Pro Western Pleasure class competed for the top prize of $7,258.80, but it was Kristen N Galyean 3Gs Partnership LLC’s KM Suddenly So Easy who took home the win.

Galyean speaks about her winning mount, “Her name is Suddenly So Easy and we call her Penelope, P. for short. She is just an amazing horse. I was lucky enough that the Masterson Farms, LLC, sold her to me last year. My first time showing her was at the World Show last year. It was nerve wracking to get to know her there, but she was amazing.”

Galyean’s trainer Aaron Moses also was rewarded a $2,500 bonus check for being the winning rider’s trainer in the class. This was Moses’s second bonus check of the day!

In the Equestrian Hotel $10,000 Maturity Western Pleasure Limited Finals, Cody J. Conover and Clara Ashlock’s Made In The Dark took home the win. This was Conover’s first time showing Made In The Dark, “He is a six-year-old Machine Made gelding. I got the opportunity to show him today and he has amazing gaits,” said Conover.

Madison Nirenstein from Austin, Texas and her own Hubbout A Dance took home $3,919.20 in the Maturity Non Pro Hunter Under Saddle Finals. Nirenstein loves her sweet gelding, “He really loves his job because he just walks in and struts his stuff. He also always has the best expression and is so happy. I bought him at the World Show in 2018 and he has been amazing. He loves this facility, and it is truly beyond words. The arenas are beautiful, and the hotel is stunning. I can’t wait to show here again,” said Nirenstein.

The World Equestrian Center – Ocala 2021 Championship Show has even more exciting competition ahead including the Non Pro Freestyle Reining on Friday, October 8 and the Open Freestyle Reining on Saturday, October 9 in Arena 5 at 7:30PM. Admission is free and parking is free! Make sure to stop by for some exciting competition. To view a facility map click here.

Congratulations to all the riders on a successful first day of finals. To see the results from each day click here.