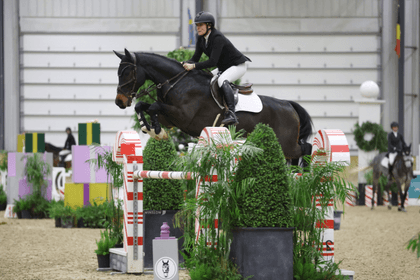 Wilmington, Ohio – Jumper competition reached a pinnacle as elite riders returned to the Sanctuary Saturday afternoon for the first $30,000 WEC – Wilmington Grand Prix of the Winter in the Midwest indoors series. Exhibitors flocked to the stands to watch as the competitive field of horse-and-athlete combinations tried their hand at Bobby Murphy’s (USA) track. Ultimately, no one would catch Corri Goldman (USA) and Cachassini’s Boy as they jumped two effortless rounds to top the leaderboard.

Murphy set an appropriately technical track for the field of young horses making their first grand prix debut, as well as veteran jumper athletes. The winding 12-obstacle first round track consisted of multiple related bending lines and two vertical-oxer combinations. Elements 9AB to element 10 kept riders out of the jump-off throughout the class, as the base of the airy vertical came up quickly off the combination, leaving many athletes with four fault rounds.

Goldman returned third in the jump-off phase aboard her own Cachassini’s Boy. The experienced amateur out of Edgewater, Maryland, piloted her 7-year-old Westphalian gelding to two confident rounds in his first ever grand prix.

“He is a 7-year-old, and this is our first grand prix. This is really his first time doing any open classes, he has only done the age classes up until now. I bought him as a five-year-old from Europe and I did him in all the age classes. I will take him to Ocala and hopefully do more classes like this!”

The duo returned for the jump-off phase looking to put it in a solid clear effort. Cachassini’s Boy proved that his athleticism, carefulness, and scope will make him a force to be reckoned with as he moves up the ranks. Goldman made tidy efforts through the turns in the jump-off phase, allowing her promising mount to jump up to her in perfect form and leave all the rails intact. The pair galloped through the timers in 37.134 seconds to add a great success to their record.

Darby Pease was the final entry to compete aboard her winningest partner, Carel Van Donderen. The 15-year-old Dutch Warmblood gelding owned by Louisa Robb has showcased his speed in the Sanctuary many times throughout the fall season. Pease, out of Danville, Kentucky, was on Goldman’s heels through the entirety of the short course, however, she fell just short of the winning time. Crossing through the timers in just 37.237 seconds, Pease secured the second-place spot on the podium.

Claiming third place honors was Alliy Moyer and Cicero’s Electric. The duo has a decorated record together with top places at historic horse shows up and down the east coast. Most recently earning ribbons at the Great Lakes Equestrian Festival [Traverse City, MI], Longines Global Champions Tour of Miami Beach [Miami, FL], and Winter Equestrian Festival [Wellington, FL], the duo does not shy at the technical questions asked of them at an elite level. Moyer of Carmel, Indiana, rode the 13-year-old Warmblood gelding to a jump-off time of 37.530, ultimately earning the yellow ribbon.

WEC – Wilmington sponsor Vitalize presented the Blazin’ Fastest Four Faulter $1,000 bonus in the $30,000 WEC Grand Prix to Darby Pease and Kamorka S, who earned a 75.589 seconds in the first round, finishing sixth in the class overall.

Earlier in the afternoon, Leann Kelly of Winslow Farm in Valatie, New York, piloted Graf Joe to a sweet victory in the $10,000 WEC – Wilmington Futures Prix. The pair emerged victorious against a field of 12 horse-and-athlete combinations posting a double-clear effort and a blazing fast jump-off time of 32.172 seconds.

The 13-year-old Hanoverian gelding owned by Sarah Hunter did not bat an eye at the challenge presented to him. The pair jumped a seamless clear first round to qualify them for the immediate jump-off phase. Showcasing his scope and incredibly large stride, Graf Joe carried Kelly to a quick and careful fault free round to secure their victory.

Drew Arnold and Theresa Kraft’s Chaccomo 11 were the first pair to go in the order and the first to go double-clear, instantly setting the pace for the rest of the field. Arnold of Caramel, Indiana, stayed on top of the leaderboard until Kelly gave him a run for his money. The 13-year-old Mecklenburg gelding jumped in textbook form, crossing through the timers at 33.150 seconds in the jump-off to secure the red ribbon.

Raquel Mazur, training out of Madison Hills Farm in Chagrin Falls, Ohio, rounded out the podium aboard her own Flex Star. The 10-year-old Irish Sport Horse Gelding carried Mazur to a speedy jump-off time of 32.175 that would have moved them into second place, however, an unlucky rail at the final fence earned them the yellow ribbon.