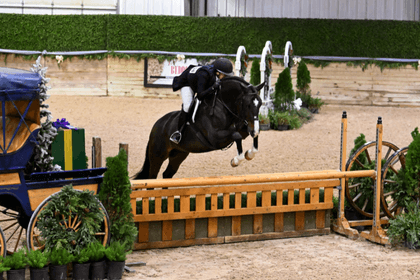 Fourteen professional hunter athletes made their way around Hern’s track in classic hunter form, boasting scores into the 90’s. In the end, it was Tammy Provost and Persuasive that earned top honors in the coveted $10,000 USHJA National Open 3’ Hunter Derby.

“This horse was fantastic two weeks ago. I thought he was the winner because he was easier to ride, so he has been knocking at the door. He was good today and he went great in the handy,” remarked Provost on her mount Persuasive.

Provost of Meadow View Farm in Sheridan, Indiana, has spent time in the spotlight in the R+L Arena, recently taking the win at Midwest Indoors I in the $10,000 USHJA National Open 3’ Hunter Derby aboard her other mount, Red Label. Provost piloted Jill Donaldson’s 9-year-old Dutch Warmblood, gelding Persuasive to a first-round score of 88 on Friday afternoon, looking to earn another derby win.

“My plan was to completely go for it because I came back in second place. I was a bit conservative in the first round since he was a bit ornery in the schooling area, so since I was behind, I decided to go for it. It is fun because he is always game, you can take him anywhere and never worry about the jumps. He will always go to the other side,” commented Provost.

Returning for the final round of competition sitting in second place, Provost piloted Persuasive to an exemplary handy effort. The duo made all the inside turns and executed a brilliant gallop to each high option available to them, scoring a 92 for an overall score of 180. Immediately moving to the top of the leaderboard, Provost added a great success to the young horse’s record.

The $10,000 USHJA National Non-Pro 3’ Hunter Derby welcomed 14 horse-and-athlete combinations; however, it was Isabella Griffin and Diacasir that delivered two seamless performances to remain on top throughout the entirety of the class.

Griffin, riding out of Westminster Farm in Huntsville, Alabama, piloted her own 9-year-old Holsteiner gelding to the highest scores of the class, holding the lead through both rounds of competition. The duo jumped to a first-round score of 88, returning last in the order for the handy round.

“I have had Balou [Diacasir] for about a year now. He is my equitation horse, and he is the sweetest. I love him to death, and he is always so fun to ride.”

The pair laid down an effortless handy round, demonstrating perfect form and flowing turns to a high score of 90, earning an overall score of 178. Griffin made a turn untried by the rest of the field on both of her mounts in the handy, setting her apart from the rest of the class to earn first and second place honors.

Griffin piloted her mount Heaven’s Dream to two picturesque rounds to secure the red ribbon. The 12-year-old KWPN gelding has a decorated record in the hunter ring, just recently coming off a successful indoors debut in both the junior hunters and the professional hunter divisions. The duo earned scores of 84 and 85 for a two-round total of 169 to take second place.