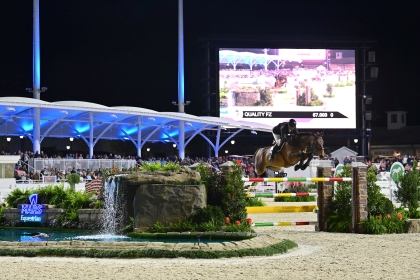 Ocala, FL – The 2023 Winter Spectacular Show Series is right around the corner! Spectators can enjoy 12 weeks full of top-level hunter/jumper action with competition Wednesday through Sunday. The 12-week series runs consecutively from January 4, 2023 through March 26, 2023. On Saturday nights, exhibitors and spectators alike can experience elite equestrian sport in the WEC Grand Arena.

An exclusive Viewing and Dining Experience is available every Saturday night during the 2023 Winter Spectacular Show Series. Enjoy show jumping action from the terrace of The Equestrian Hotel while indulging in a three-course Chef’s dinner with beer and wine courtesy of Stirrups Restaurant. A cash bar will be available for spirits and bottles of wine from sommelier’s selections.

Circuit tables can be purchased through January 5, 2023. Weekly tables become available on December 16. Priority seating will be given to holders who book early.

Make your reservations now to stay in comfort and elegance at The Equestrian Hotel, featuring 248 rooms and suites, multiple restaurants, luxury shopping and a full-service resort spa.

Choose to reserve a charming Home Away from Home rental unit or an RV space in our conveniently located park that includes a fuel station and general store with Starbucks and laundry, just steps away.