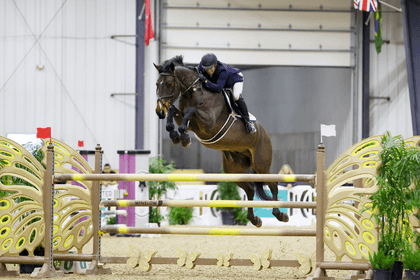 Wilmington, Ohio – Twenty-four polished athletes took to the Sanctuary Arena Thursday afternoon for the $10,000 WEC – Wilmington Welcome Stake to set the pace for Winter Classic #3. Bobby Murphy (USA) set a large, flowing track for the seasoned group of horse-and-athlete combinations. In the end, it was Michael Burnett (USA) and Chagrand (Chacco-Blue x Centogrina) that jumped the only double-clear effort to top the field.

Murphy’s track was inviting, yet appropriately technical for the competitive group of professional athletes. The 12-obstacle first round track saw various smooth, four fault rounds. Many athletes fell victim to the delicate, airy vertical that sat closely to the stands. Coming off a towering vertical in the corner to a forward seven stride line, the horses became casual with their front end resulting in a fallen rail. Seven clear efforts moved on to an immediate jump-off phase that included an opportunity for an inside track in the first line and a tight rollback to shave precious time off the clock

The winning duo has a long list of WEC – Wilmington wins, most recently taking home a clean sweep at Midwest Indoors II. Burnett, of Burnett Farms in Lebanon, Indiana, came back to the Sanctuary for Winter in the Midwest looking to top his most recent performances.

“I make time to sit on Charlie [Chagrand] every day. I ride him six to seven days a week. At this point since he is a teenager now, so he only jumps once or twice before the shows. They only have so many jumps and we will try to go back to some international classes soon. We will start out in the 1.40m in Florida and then hopefully do some 2* classes this winter,” shares Burnett on his program with Chagrand.

Burnett answered the technical questions of Thursday’s track with ease, meeting the base of each obstacle at a slight gap, suited for his scopey mount. The 13-year-old Oldenburg gelding was nothing short of spectacular, making light work of the class and showcasing his unmatched scope and athleticism. Chagrand proves to be a strong competitor with every step in the ring, as he quick across the ground and makes incredible efforts over each fence. The duo crossed through the timers in a lightning-fast time of 38.171 seconds to take the win.

Darby Pease (USA) found herself back in the winner’s circle this week aboard another top mount, Cumbaya W (Cabardino x Elena W). Pease, of Danville, Kentucky, entered the arena third in the order. She piloted Hillary Gromus’s 12-year-old Warmblood gelding the first clear round of the class, instantly setting the tone for the rest of the field. The duo possessed the fastest jump-off time of the class of 36.371 seconds, with an unfortunate rail down in the second phase to earn the red ribbon.

Sam Pegg (CAN) of Ten Sixty Stables in Uxbridge, Ontario, and Dolla 3 were late to go in the order, only needing a double clear effort to climb up the leaderboard. Most recently, Pegg and the 11-year-old Holsteiner mare owned by Ten Sixty Stables took fourth place in $30,000 WEC Grand Prix just last week during Winter Classic #2. The duo came back to the Sanctuary in top form, looking to claim yet another success. Dolla 3 jumped two effortless rounds, with an unfortunate four faults at the very last fence in the jump-off. The pair rounded out the podium landing through the timers in 40.236 seconds.