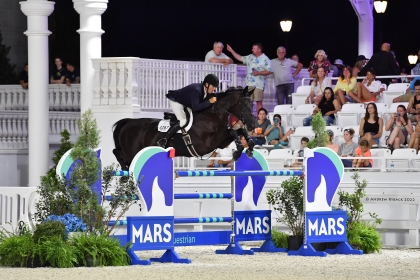 Forty-seven starters representing 14 different countries gave FEI Level III course designer, Peter Grant’s (CAN) first round track their best effort. An impressive 16 were able to navigate a clear first round and nine managed to keep all the rails up in the jump-off for a very competitive race for the blue ribbon.

Kristen Vanderveen and Bull Run Jumpers Six LLC’s Bull Run’s Prince Of Peace (Cardenio 2 x P-Comtesse) were the first pair to return down the ramp into the WEC Grand Arena for the jump-off. Vanderveen and the 13-year-old Holsteiner gelding set the pace at 42.086 seconds for the rest of the class.

However, the pair were soon replaced atop the leaderboard when Aaron Vale and Thinkslikeahorse’s 10-year-old Warmblood gelding Obi Wan (Centadel x Wenezza) found an even faster track in 41.755 seconds.

Daniel Geitner and Vesta De Lavardin owned by November Hill were the fifth-to-last pair to tackle the abridged track with the hopes of beating Vale’s quick time. “There was quite a few clean, which surprised me. I didn’t think the course was that easy, and I am sure Peter didn’t expect that many to jump clear, but when the footing, jumps and atmosphere are this amazing, all the horses just jump the lights out.”

Geitner had an idea of how he wanted to ride the jump-off aboard the talented 13-year-old Selle Francais mare, “I was lucky to have a horse go earlier in the jump-off, so I knew what striding I was going to take with Vesta De Lavardin,” Geitner said. “I did one less to the Lugano oxer and one less in the last line than I did on my earlier horse. This mare is also very fast in the air and across the ground. She wastes no time.”

The speedy duo moved to the top of the leaderboard with their clean time of 40.717 seconds and could not be caught by the remaining contenders to solidify their lead in the victory gallop.

“We bought Vesta De Lavardin as a seven-year-old and produced her through this level. She’s been a winner since day one. I think she won the first grand prix she was ever entered in. She’s just an amazing horse that really fights for the win with you.”

Geitner is not only an accomplished show jumping athlete, but it also a recognized hunter rider, “I love it all. Whether I am competing in the baby greens or the grand prix, I am having fun.”

An additional $5,000 was awarded to the fastest four-faulter of the $100,000 MARS Equestrian National Grand Prix. Santiago Lambre and his own Cetano Van Aspergem Z snagged the award with a fast time of 74.834 seconds with one rail down.