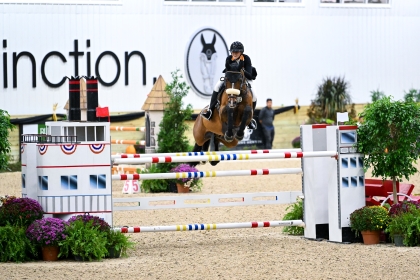 Of the 19 horse-and-rider combinations, an even eight managed to jump clean in the first round and five yielded a double clean effort.

Sean Jobin (CAN) and Foxridge Farms Stables’ Cuba Libre V (Cornet Obolensky x Grace) were the first pair to return to the jump-off but fell victim to an unfortunate rail at the R+L vertical.

Nicole Lootchan and her own Goblin (Baltic VDL x Catascha Z) entered the Sanctuary Arena next, producing an efficient jump-off in 38.652 seconds which landed the pair in fourth place.

Fourth to return was Cassandra Orpen and Ultimately Cooley (O.B.O.S Quality x Tiamo Diamant), but the pair had an unfortunate rail. Hillary Johnson and her own Eastpoint (Cardento x Jorlanda) managed to find a clear round in 40.648 seconds, which resulted in the fifth place.

Last week’s winner, Santiago Lambre (BRA) and his own Cetano Van Aspergem Z (Altamira Z x Clinton) were the second-to-last pair to return for jump-off. Lambre and the 13-year-old Zangershiede gelding soared around the course, flying across the ground and clearing the fences in 36.715 seconds.

Victory seemed to be sealed, until Darby Pease and Carel Van Donderen entered the arena. Pease and the 15-year-old Dutch Warmblood gelding took off at the sound of the buzzard.

“I had one simple plan, go as fast as I possibly could and hope my horse wouldn’t knock any jumps down in the process,” laughed Pease. “I did have an advantage to the R+L vertical. It walked an eight in the first round, but Carel has a bit of a left drift, so I rode the seven initially. So, in the jump-off I knew exactly how the seven rode and it came up perfectly.”

The pair flew through the remainder of the course, not tipping a single rail to stop the jump-off clock at 34.553 seconds.

Pease shared her thoughts about her first grand prix victory, “I am still in shock. While I was riding the short course all I thought to myself was ‘go faster and don’t touch the reins.’ There were so many talented riders tonight, so I knew winning was going to be a longshot, but that wasn’t going to stop be from trying. It also means so much to have my first grand prix victory at WEC. I have been showing here for three or four years now, and I barley go anywhere else. The staff, TJ and everyone here has become a second family to me, so it means so much to take my first big victory here.”

Carel Van Donderen is a new partner for Pease, “I have been riding Carel since February. We originally bought him to be a lease horse, but we found that he was a bit quirky in the schooling ring and at that point I had already fallen in love with him. My grandmother ended up buying him for me and I have been showing him ever since.”

World Equestrian Center – Wilmington’s General Manager TJ Campbell commented on this afternoon’s class, “I think that Bobby Murphy had a well-designed course. There were many new elements out there that made the track challlenging for everyone. We had a great field of riders come out to play today and it made for a very competitive jump-off. We are excited to see Darby Pease take her first ever grand prix win here at WEC. Darby is a very loyal WEC exhibitor are we are excited that she gets to add a $50,000 victory to her list of accomplishments. At the end of the evening, I think everyone rode to the best of their abilities and we couldn’t have asked for a better class.”

The additional Vitalize® Blazin’ Fastest Four-Faulter Award was secured by Santiago Lambre for the second week in a row. This time he claimed the award aboard The Diamant Rose Z.

Back-to-Back Wins for Richard Rinehart in the $10,000 WEC Futures Prix

Earlier this afternoon, thirteen starters competed in the $10,000 WEC Futures Prix. Bobby Murphy (USA) designed the inviting tracks where nine entries found the path to a clear first round. It was a race to the top, with the lead switched out numerous times, but at the end of the class it was last week’s winner, Richard Rinehart who snagged the fastest time aboard his Ron Caraway’s Vincent (Van Gogh x Nirande).

Rinehart and the ten-year-old Dutch Warmblood gelding were the second-to-last pair to vie for the top prize in the class. The pair navigated a seamless first round in 75.504 seconds.

Rinehart spoke about Vincent, “He’s an incredible horse owned by Ron Caraway. He has had some great ribbons in the grands prix, so this was a bit of a class drop for him. I was very proud of Vincent today, he put forth a great effort. He was third in last week’s class, so he was due for a win.”

Rinehart and Vincent advanced straight to the short course, “I decided to pass on the inside turn to the double combination. Vincent is very careful and doesn’t like to jump combiantions off the short turn, so my plan was to have a solid foot speed around the course.”

“I left out a stride in the first, second and third line. I tried to be as efficient as I could everywhere and use his step to my advantage. The last jump could have come up a bit better, but Vincent made a really nice effort there,” Rinehart shared.

The pair flew through the jump-off timers in 35.679 seconds for the blue ribbon.

Rinehart had some tough competition in today’s class, “My son Luke was very fast. That was the first time we’ve shown together for money, and he put in a really great round,” Rinehart said. “I am so thankful for Ron Caraway, the staff at the barn and my family. We have a great atmosphere at the barn and it’s always great to have everyone cheering us on.”

Just behind Weithofer and Trig Happy Wind Van Het Eikenhof was Jonathan Cohen and his own Lander (Ustinov x Owarla). Cohen and the 11-year-old Dutch Warmblood gelding found a smooth first round in an efficient 75.051 seconds, well under the time allowed of 83 seconds. The pair advanced to the jump-off, galloping around the tracks in 39.933 seconds to secure third place.