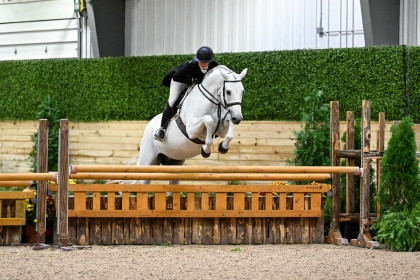 Thirteen professional hunter athletes competed over Barton’s open tracks in the $10,000 USHJA National 3’ Open Hunter Derby with the hopes of securing the blue ribbon, but it was Hillary Johnson and Stephanie Battershall’s Blue Monday (Bornet Obolen x Hewa) that earned the highest overall score for the judges.

Johnson and the elegant 12-year-old Holsteiner gelding put forth a superb first round, jumping all four high options with ease for a score of 88.

Blue Monday knows his job, “He’s an absolute blast to ride in the derbies. This is his career; he does the derbies with me, and his owner/mother is hoping to make her show ring debut this winter competing in the cross rail or long stirrup classes. He loves both jobs and does them very well,” said Johnson.

Johnson and Blue Monday were the second-to-last pair to return for the handy, “I had two horses in the handy. I rode the same plan on my first horse, Suede, but executed it better on Blue Monday. The first line in the handy was a bit more going and spookier than I anticipated, but I was able to get down the line a lot smoother on Blue Monday.”

The pair floated around the rest of the course, taking numerous inside turns while jumping the high options to earn the highest score of the day, a 92 for an overall score of 180 which secured the pair the blue ribbon.

“Blue Monday wasn’t even supposed to come to this show,” laughed Johnson. “At the last minute we had an extra spot on the trailer, so we threw him on, and I think it ended up being a great decision.”

The $10,000 USHJA National 3’ Non Pro Hunter Derby saw a competitive field of 15 horse-and-rider combinations, but none could best Nicole Lyvere and her own Haribo (Lordanos x Arabella).

Lyvere and the talented ten-year-old Hanoverian delivered a lovely, flowing first round to earn a score of 89.

Haribo is a longtime partner for Lyvere, “I purchased Gummy when he was four-years-old. My old trainer at the time had imported him and I fell in love as soon as he stepped in the barn. I waited for a couple of months, but I knew when my grandmother met him, she would fall in love with him too. At the end it was meant to be, and I’ve owned him for six years.”

Lyvere and Haribo were last pair to return for the handy, “I knew Gummy could do all the inside turns. He’s very athletic but lazy, so I am able to land and turn well. I knew the turn after the first jump, was going to be a bit of a challenge, but he stayed right with me.”

The pair negotiated a gorgeous handy round to earn a score of 88 for a two-round total of 177 for the victory.

Lyvere spoke about today’s tracks, “I really enjoyed both courses. I think the first round asked a lot of questions without being too crazy. The handy was right up my ally. It offered many inside turns that allowed you to show off your horse’s strength and step. At the end of the day, it was perfect for Gummy.”