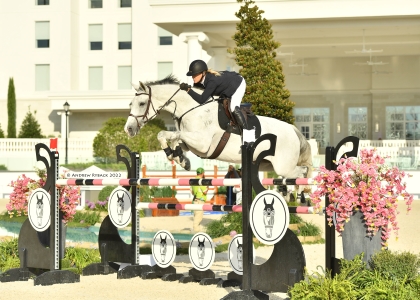 Out of the 37 contestants, nine combinations from six different countries delivered a clear effort in the first round and four went double clear. Sheer Levitin and his own Vitus K were the first pair to return, producing an efficient jump-off in 41.628 seconds which was good for fourth place.

The next double clear entry in was Tracy Fenney (USA) and MTM Apple. Fenney and the talented 11-year-old Danish Warmblood mare are coming off of a win from last Sunday’s National Grand Prix.

“I knew I had Erynn Ballard and Santiago Lambre behind me. Like I said last week, I don’t mind going toward the beginning of the order, because when that mare is on, we just go and hope everyone has to chase us.”

Fenney knew what she had to do for the jump-off, “I knew I could get the five from the liverpool to the Lugano vertical. Mike [McCormick] had Dorrie [Douglas] do it in the first round, so I knew it was right there. Then I thought it could either be the seven or the eight in the last line, but it depended on how you caught the Coca-Cola fence. I caught it exactly how I wanted to, a bit slower so I could do the eight, but once I landed the seven was right there.”

The fantastic duo soared through the timers stopping the clock at 34.851 seconds, more than four seconds faster than second place.

“Apple is the best. We will probably just continue to the Saturday night grands prix. She only needs to jump once a week, I don’t even jump her at home. We just keep her fit and on her game. She loves the atmosphere here and always jumps her best in that ring.”

The final double clear ride went to Santiago Lambre (BRA) and his own Dingeman (Nintender x Jolanels). Lambre and the quick 14-year-old KWPN gelding cruised around the short course, leaving all the rails up in 39.700 seconds to round out the top three.

An additional $5,000 was awarded to the fastest four-faulter of the $50,000 Coca-Cola Beverages Florida National Grand Prix. Second place finisher, Erynn Ballard snagged the award aboard her other mount, Narcotique V/H Dingenshof owned by Ilan Ferder. The pair secured the award with a fast time of 71.187 seconds with one rail down.

Blythe Karolyi received the $5,000 ‘Luck of the Draw’ award.