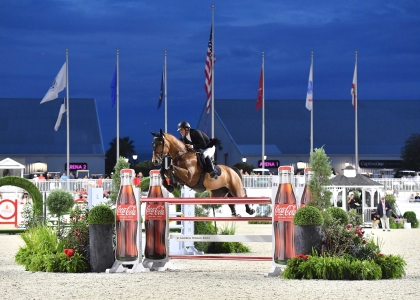 Ocala, FL – The final day of FEI CSI3* competition during World Equestrian Center – Ocala’s 2022 USEF Summer Series culminated with the $140,000 Coca-Cola Beverages Florida FEI CSI3* Grand Prix. World-renowned course designer, Alan Wade (IRL) created the final FEI three-star track that proved to be quite a challenge. At the end of the night, it was Evan M. Coluccio (USA) and Hampton Green Farm LLC’s Valdes Z that claimed the number one spot on the leaderboard.

Thirty-two starters from ten different nations gave Alan Wade’s impressive track their best effort, but only seven of the original entries managed to earn a slot in the jump-off.

The first entry to return was Kristen Vanderveen (USA) and Bull Run Jumpers, Inc.’s Bull Run’s Risen. The duo flew around the short course, but fell victim to a rail at the final fence.

Chance Ste Hermelle has been an accomplished partner for Dean, “I have had Chance Ste hermelle for two and half years now. She is an incredible horse that has brought me to so many amazing places like the Nations Cup™. I am so grateful to be able to come to this unbelievable venue and do well. I have had a blast showing here and I hope to come back soon for more international competitions.”

Olympian Santiago Lambre (BRA) and his own 12-year-old Oldenburg gelding Pampero (Chacco-blue x Nekton) followed Dean with the hopes of clear round. Lambre proved his talent with a flawless round aboard Pampero, shaving more than two seconds off the previous leading time in 37.39 seconds which was good for second place.

Lambre is proud of Pampero’s growth, “I have owned him since the beginning of the year. He’s been improving with each grand prix under the lights. At first, he was a bit spooky, but he is continuing to gain confidence. I think he has a lot of potential and hopefully we will do some five-star events soon.”

Aaron Vale (USA) and Thinklikeahorse’s Obi Wan came close to the win with a time of 36.74 seconds, but a rail relegated him to sixth place. The youngest athlete of the night, Sophia Siegel (USA) and her own A-girl secured the fourth-place finish when they managed to leave all the rails up in 40.91 seconds.

Coluccio was the last contender of the evening with Valdes Z, “He is only nine years old. All of this is still pretty new for him. I got him toward the end of last year and began showing him this winter. I slowly built him up during the circuit and right off the bat he jumped double clear under the lights in Wellington. He’s been very consistent and has been knocking on the door.”

Coluccio and the talented nine-year-old Zangersheide gelding shot into high-gear and flew around the track, leaving all rails up in 36.98 seconds for the victory.

“I was debating leaving out a stride in the first line after I watched Kristen Vanderveen get the six. I jumped in and decided it would be better to wait, but I thought I could get the six done in the next line. Valdes Z did it with ease. After that, I just tried to keep everything together. He deserved that win, he has been trying his heart out for me and I am beyond grateful to be able to ride him,” Coluccio said.

“I have had such a wonderful time here and I am already looking forward to coming back. I think that this was just the start, this facility has the potential to hold some of the biggest championships and I hope to be apart of them.”