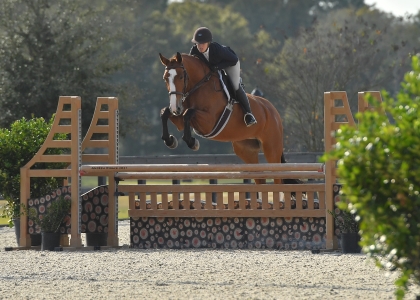 Another Derby Friday has commenced at World Equestrian Center – Ocala in Hunter 1 as forty-five stunning hunters vied for the win in the $12,500 WEC Ocala 3’6”-3’9” Hunter Derby and $10,000 WEC Ocala 3’ Hunter Derby. Doug Russel designed the natural tracks that featured an abundance of inviting obstacles with three high options.

Thirteen gorgeous horse-and-rider combinations took to Hunter 1 this afternoon to compete for the top prize in the $12,500 WEC Ocala 3’6”-3’9” Hunter Derby. Competition was fierce with scores soaring into the high 80s, but it was Dorothy Douglas and Abigail Davenport’s MTM Lolah LOL that took home the top prize.

Douglas and MTM Lolah LOL (Los Angeles x Palma) have had previous success earning multiple top three finishes during World Equestrian Center – Ocala’s Summer Series. Douglas has had an impressive year with MTM Lolah LOL, “Lolah is amazing. This year, she ranked second for the highest amount of money won for international derbies and was first highest in money won in the first-year green hunters.”

Douglas and the eight-year-old Westphalian mare produced a lovely first round taking all three high options with ease to earn a first round score of 87.

“My goal for today was to be smooth and have Lolah jump as high as possible. She is incredible and so consistent. I can’t wait for the 2022 show season,” said Douglas.

Douglas and MTM Lolah LOL returned for the handy, cantering right from the gate to fence one to take a nice inside turn back to the high option. The pair rolled seamlessly over the high option vertical in the center of the ring to easily bend to the large oxer. Douglas and MTM Lolah LOL jumped the combination with ease to take a tight inside turn back to the oxer. The pair came down to a trot and jumped the log. Douglas held a counter canter with MTM Lolah LOL to the last oxer where MTM Lolah LOL showed off her incredible scope. The pair earned a handy score of 88 for a two round total of 175 for the win.

Tracy Fenney and MTM Farm’s MTM Plus One (Captain Jack x Cantonia) took home the second place ribbon in today’s $12,500 WEC Ocala 3’6”-3’9” Hunter Derby. Fenney and MTM Plus One also captured multiple top three placings during the Ocala Summer Series. Fenney and the eight-year-old Westphalian gelding delivered a solid first round earning a score of 83. The pair returned for the handy, taking each inside turn while jumping all three high options to receive the class’s highest handy score of 89, for a two-round total of 172 for second place.

Third place was earned by Lauren Schweppe and James York’s Collins. Schweppe and the adorable 11-year-old warmblood gelding jumped a beautiful first round earning a score of 83. Schweppe and Collins returned for the handy rolling through the turns, jumping each fence in prefect form to receive a score of 84 for an overall score of 166.

On Friday morning, thirty-two competitive entries took to Hunter 1 for the $10,000 WEC Ocala 3’ Hunter Derby but it was Erin-McCabe Clayton that earned both the first and second place finish.

Clayton and Cecilia Halsey’s Griffin produced a gorgeous first round, while jumping all three high options to earn a score of 85. Clayton is very happy with Griffin’s progress, “Griffin came to me early this summer. His owner purchased him a year beforehand, but he hadn’t been doing a lot. So, we have been working all year to get to this point because we though he would be a fun derby horse. Today, everything finally came together,” said Clayton.

Clayton and the 10-year-old Warmblood gelding came back for the handy, flowing nicely through the course while jumping all three high options to earn a score of 88 for an overall score of 173.

Clayton enjoyed today’s courses built by Doug Russel, “I really liked both courses. Doug always does a fantastic job. They were challenging enough but gave options to really show off your horse. The handy had a few places where you could pick to do an inside turn or not. I chose to do all the inside turns with both of my horses and it rode really smooth.”

Clayton and her second mount, Cosworth earned the class’s highest first round score of 88. Clayton and the seven-year-old Dutch Warmblood gelding also captured third place during last week’s $10,000 WEC Ocala 3’ Hunter Derby. Clayton and Front Row Sport Horses, LLC’s Cosworth (El Primero x Zaranka) returned for the handy, easily taking inside turns while jumping each high option with ease to earn a score of 83 for a two round total of 171.