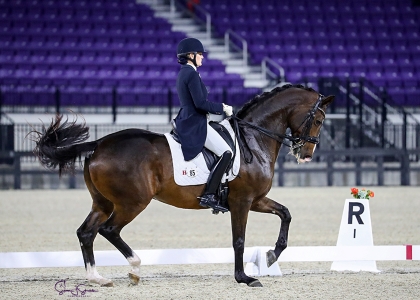 Olympic team bronze medalist Holzer and Havanna 145, a 14-year-old Hanoverian mare by Hochadel x Rodgau owned by Dr. Diane Fellows, won with a score of 79.365%. Second place went to Codi Harrison (USA) and her own Katholt’s Bossco; they received a score of 76.205%. Katie Duerrhammer (USA) and Kylee Lourie’s Quartett finished third with 75.195%.

Power was the word of the night for Holzer, who attributed that as the reason she and Havanna increased their freestyle score by almost three percent since October’s CDI at WEC.

“I came in with a little bit of a different tactic this time,” explained Holzer. “Katherine Bateson kindly came over and was eyes on the ground since [manager] Nate [Tucker] wasn’t here this weekend. She was really clear and said, ‘I think you can get her a bit more powerful and more forward.’ I have to thank her for that because I think that was the difference.”

Holzer has the 2022 FEI Dressage World Cup™ Final in Leipzig, Germany, as a goal, and she is well on her way to qualifying after two victories at the CDIs at WEC.

“It’s huge to have a CDI here,” Holzer confirmed. “This is truly an international venue. To be able to bring your horse here and know as a rider your horse can go in these rings and do their job is really an incredible feeling. It gives you a lot of confidence. If they can go in there, they can pretty well go anywhere.”

Holzer believes that Havanna will thrive in a World Cup Final situation. “I think that she’s a great indoors horse,” she said. “The short Grand Prix is actually to her liking. She’s not a horse that gets easily spooked. I like the freestyle that Tom Hunt did for me. I’m really hoping that that will be in our future.

“I think it would be so much fun for my owner,” continued Holzer about Dr. Diane Fellows. “She’s put so much into our combination. I can’t even put words to how supportive she is.”

For Codi Harrison, competing in only her second-ever grand prix freestyle was a special moment for a horse that has been such an important partner in her riding career. They started out 2021 in the Under 25 division, having only first competed in the grand prix in October.

“I thought he may peak in the U25, and he came back better than ever after we gave him an easy summer,” she said of the 14-year-old Danish Warmblood stallion by Don Schufro x Michellino. “I’m a rookie in this. To have a horse that can learn with me and develop with me, can come out and prove that he’s worth being here and deserves to be here, is super exciting. I hope it continues to get better. I don’t know how much more I can ask from him, but I’m thrilled. I really have no words; I’m just so proud of him.”

Katholt’s Bossco “really thrives in a big atmosphere,” said Harrison. “He’s one that when the crowd got going, he got going. He’s fun in that sense. The bigger the atmosphere, the better for him. I went for it a bit more this time. Last time I was a bit more conservative since it was still new. Today I heard Ashley’s score, and I just gave it gas!”

Katie Duerrhammer was also competing in only her second grand prix freestyle. She and Quartett showed in their first grand prix one year ago. “We’re very green at this level, but he’s the kind of horse that makes you feel like you can really trust him,” she said. “If he can do it, he is going to do it for you, no matter what comes around. I think having a horse like that to get mileage on, with that kind of heart and trust, is so wonderful, in order to get your feet wet in this kind of atmosphere.”

Duerrhammer’s freestyle and music is by Terri Gallo. While she admitted that she’s “usually not the biggest fan of freestyles” due to her love of order and structure, she admitted that it has been really fun for her to take on the class.

“I don’t think I’ve ever had a horse that loves being at a horse show more than him,” said Duerrhammer of the 13-year-old German Sport Horse gelding by Quaterback x Dream of Glory. “He lights up, and that’s his deal. I told Terri that I wanted something that was fun and happy and really shows how harmonious he is and how much he loves to do his job. He has things that he struggles with; he’s not the most talented at certain things. His heart makes up for it by tenfold. She put together a really fun freestyle for us, and I think it worked really well.”

Duerrhammer also gave thanks to her owner Kylee Lourie, who has been her sponsor for nearly 10 years and supports her business partner, Olympic team silver medalist Adrienne Lyle. “I feel extremely blessed,” she expressed. “She’s put a lot of faith and trust into Adrienne’s training program and my training program. To have her come here and get to see this happening was really, for me, the highlight of everything.”

Pablo Gomez Molina piloted Ulises de Ymas, an 11-year-old PRE gelding by Seni Indio x Superior II owned by Cristina Danguillecourt, to victory in the Grand Prix Freestyle CDI3*. The pair, who competed in October’s CDI at World Equestrian Center – Ocala and finished third in the Grand Prix Freestyle CDI-W in their first ever CDI freestyle, improved on their test by making small changes that led to a big win. They were rewarded by the judges with a score of 75.640%. Tyra Vernon (USA) and her own Ruben placed second with 69.130%, while Jacqueline MacDonald (USA) and her own Malcarat were third with 68.385%.

Gomez Molina felt that Ulises de Ymas gained strength since their last competition in October and being in the outdoor stadium was an advantage for his horse, who was more nervous in the indoor arena. Small changes, such as being more collected in the passage and quicker in the piaffe, were what he felt led to a better score and performance this time around in the freestyle.

He noted, “It wasn’t big changes and was the same pattern, but just little things to make more points in those movements. We watched the test and saw where we could make more points, and we tried to do that today. He felt a tiny bit tired today, but still I was able to ride him, and we got a better score than last time. He was really willing to go and did everything well for me. He still tried his heart out, and I’m happy about it.”

It was a big decision for Chloe Fullar to travel from Berrien Springs, Michigan, to World Equestrian Center – Ocala for her first ever CDI as a rider, but the decision paid off as she took the win in the Prix St. Georges class with her own Farley 4 with a score of 65.000%. Eline Eckroth (USA) rode Connie Wise’s Daphne to second on 64.853%, while Ivo Juhrend (NED) and Black Diamond were third with 63.725%.

It was a special show for Fullar, who first found Farley 4 in 2016 in Germany. Her student purchased the then-16-year-old Hanoverian gelding by Fabriano x Woodstock to compete at the young rider level. Another student of Fullar’s purchased the horse the following year and competed at the North American Youth Championships, but Fullar made the decision to buy him herself this past July.

“He is mine, and he’s a gem,” said Fullar. “When I got him back, I wasn’t sure what he wanted to do, so my best friend and assistant said to take him to one of the shows and see if he wants to still do something, and he did. I’ve actually had an incredible season, and I wanted to cap it off with a CDI. I’m really thrilled and blessed to have him back and to own him. I’ll have him for the rest of his life.”

With Farley 4 still feeling game at the spry age of 21, Fullar will “listen to him and see what he wants to do for the rest of his life after this,” she said, but has tentatively set the goal of qualifying for the U.S. Dressage Festival of Champions in the small tour next year.

She remarked about her test, “I was really thrilled with him, and there is always a learning experience with it. I had a couple little hiccups and nerves.”

Where Farley 4 usually shines is in the canter work. “He really sits and is engaged and has gorgeous, uphill changes,” described Fullar. “His extended canter is amazing. We have been playing with strengthening our trot tour.”

This was Fullar’s first time at World Equestrian Center – Ocala. “It is something!” she expressed. “I’ve had clients come and friends tour it, but until you’re here, you can’t believe it. It’s just unbelievable. I haven’t even gone all the way around the place yet. We’re grateful to be here. It’s beautiful, it’s clean, and Florida is always fantastic.”

Competition at the World Equestrian Center Dressage V continues on Saturday, December 11, with the CDI Intermediate I and the Grand Prix Special CDI3*, which starts at 2:54 p.m. For more information, visit www.wec.net.