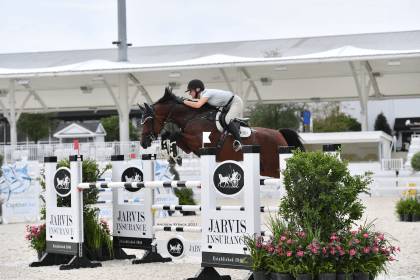 Douglas has had great success on MTM Pablo (Perigueux x Celina) during the World Equestrian Center – Ocala NSBA Summer Series, earning a win just last week in the $10,000 WEC Ocala Futures Prix and now two wins in the $15,000 WEC Ocala 1.40m Jumper Classic. Douglas and the eight-year-old Warmblood gelding were the fourth entry to deliver a clean first round, stopping the clock at 82.801 seconds. “MTM Pablo is amazing. He lights up a little bit every time he goes in the ring but in the sense that he knows it’s time to do his job,” said Douglas.

Douglas and MTM Pablo advanced straight to the jump-off, jumping fence one to two in eight strides, “I could have actually left out one more step from one to two in the jump-off because we did that in the first round. I walked a nine but ended up doing eight, so looking back on it, I think if I went a bit later in the class, I probably would have planned on seven in the jump-off.”

Douglas and MTM Pablo took a tight inside turn to the Triple Crown vertical, “I caught the in of the new line at the top of the ring so well, I was easily able to jump out in six. Then I had to stay tall and wait during the tricky line going toward the gate. I landed in the right corner after the vertical in-and-out and then the last jump just showed up perfectly.” Douglas and MTM Pablo flew through the timers stopping the clock at 37.797 seconds.

Second place honors went to Olympian Santiago Lambre (MEX) and his own Doloris (Harley VDL x Colinda D). Lambre and Doloris earned fifth place earlier this week in the $15,000 WEC Ocala Welcome Prix. Lambre and the 13-year-old KWPN mare were the third entry to deliver a clean first round stopping the first round clock at 83.809 seconds, just within the time allowed of 85 seconds. Lambre and Doloris (Harley VDL x Colinda D) jumped-off immediately soaring from fence one to two in seven strides to roll back to the triple crown vertical. The pair soared through the bending line in six strides to gallop through the remainder of the course stopping the clock at 38.037 seconds to earn second place.

Rounding out the top three in today’s $15,000 WEC Ocala 1.40m Jumper Classic were Alejandro Karolyi and Karolyi Showjumping Inc.’s Venitienne. Karolyi and the 12-year-old Selle Francais mare were the first pair on course to deliver a clean first round stopping the clock at 80.584 seconds, well under the time allowed of 85 seconds. The pair advanced straight to the jump-off, soaring over fence one to fence two, to roll back to three. Karolyi and Venitienne balanced for the tight double combination but flew to the last oxer to stop the clock at 38.497 seconds, just behind Lambre and Doloris.

Foley (IRL) and the eight-year-old Dutch Warmblood gelding delivered a fast and smooth clean round toward the end of the order, stopping the clock at 78.299 seconds. Foley and Idalgo needed to best second place finishers, Aaron Vale and Camiro Blue PS’s fast jump-off time. “The jump-off was a little more of a ride or die situation. Luckily the horse is smart and figured it out. I had to go as fast as I did because every other rider was already so quick,” expressed Foley.

Foley and the speedy Idalgo started off on a strong gallop to fence one for a quick left turn back to fence two. The pair soared through the bending line not hitting the brakes once to gallop to the double combination. Foley and Idalgo flew around the turn to the large oxer to soar to the Triple Crown oxer. The pair raced down the last line to stop the clock at 42.821 seconds. “I can ask Idalgo to do anything, and he will do it. He is a pleaser and an amazing jumper.”

Congratulations to all riders on another fantastic week of equestrian sport!