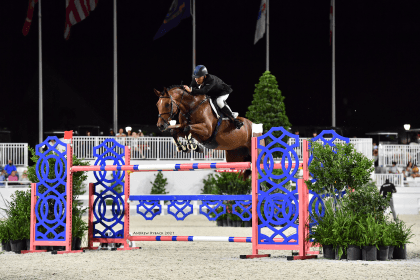 An international list of competitors from 11 different countries took to the WEC Grand Arena Saturday night to contest the $75,000 Agricon Kubota Superstore Grand Prix. Doug Russell designed the winding track that featured a difficult triple combination that tested many riders throughout the night. Sixteen horse-and-rider combinations managed a clean first round and ten jumped double clear, but it was Aaron Vale and Thinks Like A Horse’s Prescott that snatched the win.

Aaron Vale has had great success at World Equestrian Center – Ocala, now winning eight grands prix. Vale had an unfortunate rail down on his two other mounts Major and Elusive early in the class but returned with Prescott to deliver a smooth clean round, stopping the clock at 79.201 seconds.

Vale had to change his plan for the jump-off, “It was helpful to go later in the order because I got to watch a few jump-off. I walked the jump-off and had a plan for striding, but no one was doing the strides that I thought I could do, so I had to rethink my plan.”

Vale and Prescott by Lordanos returned to the jump-off, trying to best Tracy Fenney and MTM Dolce Vita’s time. “I was good from one to two, back to three. I originally thought that I could get ten strides to the Golden Ocala oxer, but everyone was doing eleven. I also thought I could get eight to the green vertical, but everyone did nine except [MTM Apple] and Tracy. I was 13 or 14 strides to the Lugano [Diamonds] oxer, then rolled to the double. I wanted to turn tighter to the double combination but my horse is a bit greener, so I stayed out which set me up for the seven home, which is where I had the class.”

Vale and the nine-year-old Holsteiner gelding soared through the final timers to stop the jump-off clock at 42.175 seconds for the win.

Tracy Fenney and MTM Dolce Vita (Philadelphia x Diarado) were just behind Vale and Prescott in the $75,000 Agricon Kubota Superstore Grand Prix. Fenney also managed clean first rounds on her two other mounts MTM Apple and MTM Reve Du Paradis. Fenney and the nine-year-old Holsteiner mare navigated a clean first round relatively early in the order, stopping the clock at 78.127 seconds. Fenney and MTM Dolce Vita were the fifth pair to return to the jump off, flying from fence one to two in six strides, for a tidy roll back to three. The pair went on a flat gallop to the Golden Ocala oxer to walk down the line in nine strides. Fenney and MTM Dolce Vita soared to the Lugano Diamonds oxer to quickly turn back to the double combination. The pair managed eight strides home to the chapel vertical to stop the clock at 42.811 seconds, which was the time to beat until Vale and Prescott entered the jump-off.

Third place honors went to Jordan Petersen and Derek Petersen’s Diamant’s Legacy, who earned second place in last week’s grand prix and won this week’s $15,000 WEC Ocala Welcome Prix. Petersen and the 12-year-old Oldenburg stallion were the second pair to deliver a clean first round stopping the clock at 76.969 seconds, well under the time allowed of 81 seconds. The pair returned for the jump-off, starting off strong with a nice gallop from fence one to two. The pair raced through the rest of the course, leaving all rails up to stop the clock at 42.925 seconds.

The non-award-winning entry that received the Luck of the Draw $5,000 prize was Francie Nilforushan and Florencio.

Started in 2008, Agricon Equipment / Kubota Superstore is a full line Kubota Dealer with locations in Ocala, Lecanto and Orlando. In the last 8 years, Agricon has been #1 Kubota dealer in the USA three times for percentage of increase, besting more than 1,000 other Kubota dealerships. Stop by and experience the Agricon difference!