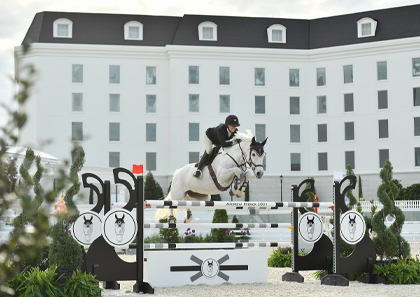 The World Equestrian Center — Ocala Winter Spectacular 2021 feature classes kicked off this afternoon with 26 entries in the $20,000 Welcome Prix 1.45m. The stately Equestrian Hotel set the perfect backdrop for fierce competition in the Grand Area. Four entries managed double clear rounds, but it was Dorrie Douglas and MTM Farm’s MTM Chelsea 98 (Cristallo x Lacanau) that sped to the win.

The course for this afternoon’s $20,000 Welcome Prix 1.45m was designed by Bobby Murphy of Lexington, Kentucky, and featured 15 jumping efforts including three combinations and a liverpool oxer. First to contest the track was Santiago Lambre and his own Easy Girl (Conthargos x Nanina). Lambre and the fiery 10-year-old mare set a strong pace for the class right out of the gate, jumping a clear first round in 82.133 seconds. The pair continued straight to the jump-off, taking the inside track to fence 2, quickly rolling back to fence 7 and opting for a tight inside track to fence 9. Their efforts paid off as they crossed the timers with all rails up at 42.613 seconds, setting a tough time to beat for the remaining entries.

Lambre returned later in the order aboard his own Mick Jagger (Chacco-Blue x Centina 10). The pair navigated a clear first round in a time of 81.626 seconds, then advanced to the jump off to complete the course in 42.489 seconds, but with one unfortunate rail. However, their quick time and clear first round were enough to keep them in the top five placings. Lambre also rode his own Dingeman (Nintender x Jolanels) in the $20,000 Welcome Prix 1.45m. Lambre and the 13-year-old KWPN gelding had one unlucky rail in the first round, but were quick with a time of 79.528 seconds, landing them in the top ten placings of the class.

Lambre and Easy Girl held the lead throughout the class until Dorrie Douglas and MTM Farm’s MTM Chelsea 98 (Cristallo x Lacanau) took to the course. The pair have taken several top placings in Grands Prix across the nation this year and brought their A-game to the first feature class of the World Equestrian Center — Ocala Winter Spectacular. Douglas and the 11-year-old Westphalian mare took their time in the first round, jumping clear in 83.000 seconds, one second under the time allowed. The pair picked up the pace on the short course, mirroring Lambre’s inside track and blazing through the timers. They stopped the clock at 42.084 seconds, taking over the top spot.

Jordan Petersen and Derek Petersen’s Diamant’s Legacy (Diamant de Semilly x Courtney Love II) also laid down two impressive rounds in this afternoon’s $20,000 Welcome Prix 1.45m. The pair were fresh off of a win in the $25,000 SmartPak Grand Prix at the Ocala Holiday Festival and were ready to compete. Petersen and the 11-year-old Oldenburg stallion delivered a clear first round in 81.523 seconds, signaling that they would be tough competitors on the short course. The duo also chose the inside track in the jump-off, jumping a second clear round in 42.537 seconds, sliding into 2nd place, leaving Douglas and MTM Chelsea 98 in 1st place and moving Lambre and Easy Girl into 3rd.

We caught up with the owners of MTM Chelsea 98 and MTM Farm, Mike McCormick and Tracy Fenney, after the class to chat about the mare’s win. Fenney laughed, “She really is a unicorn.” McCormick added, “We originally sold MTM Chelsea 98 as a Children’s Jumper, but the owners preferred a little bit of an easier horse. So, we started jumping her around and she jumped everything we cantered toward. She won eight grands prix last year. Dorrie rides her really well. She’s well-bred; there’s a reason she jumps like that! I could say that we trained it, but I think that God made her like that.”

McCormick described MTM Farm, “We don’t have any clients, but we do have a few investors that just love to come watch their horses jump. We have a huge sale business. We probably import 80-90 horses per year. We are lucky to have such a good staff. The girls are smart and Dorrie is amazing. She’s worked for us for 10 years, this year. She’s a tryer and she works hard.”

When asked about her mount in the class, MTM Dole Vita (Diarado x Philadelphia), Fenney shared, “She’s super green, but she was good. I do have three that I am going to show in the $75,000 Grand Prix on Saturday.”