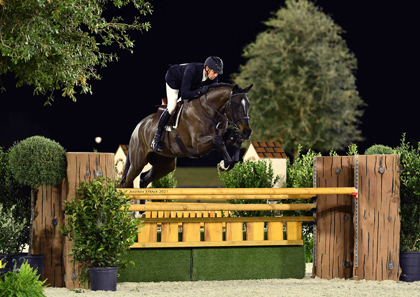 Derby action kicked off today at the World Equestrian Center — Ocala Winter Spectacular with thrilling hunter derbies including the $20,000 WEC Hunter Derby 3’6″ – 3’9″, the $15,000 WEC Derby 3′ Open and the $15,000 WEC Derby 3′ Non Pro. The beautiful 5,000 seat stadium set the stage for stunning courses designed by Thomas Hern, Jr. of Plymouth, Massachusetts. Each class featured two-stride lines, plenty of opportunities for handy turns and a pair of trot jumps angled next to one another that allowed entries to choose their own path through the course.

This evening’s $20,000 WEC Hunter Derby 3’6″ – 3’9″ saw tough competition throughout the class, but it was hunter-newcomer William Coleman and Jill Grant’s Tropics (Diarado) that nabbed the win with a pair of scores reaching into the 90s.

Coleman and Tropics took to the course early in the order, setting the bar high by laying down a flawless course and taking all four high options for a total score of 91. Coleman and the 10-year-old Selle Francais gelding were last to return in the handy round and held nothing back, taking inside turns to fences 1, 2, 4, and 6. With an option to turn right or left to a final line after fence 6, the pair chose to turn left, demonstrating a brilliant effort over the final fence for a score of 93, brining their overall score to 184 for the win.

While Coleman and Tropics were the one of only two entries to score into the 90s in the $20,000 WEC Hunter Derby 3’6″ – 3’9, several other entries had impressive rounds including Melissa Donnelly and Elizabeth Becker’s Corlando 49 (Cartani x Olanda I). Donnelly piloted the 15-year-old Holsteiner gelding through two beautiful courses for scores of 79 and 86 and a 2nd place finish. Just behind Donnelly were Carly Campbell-Cooper and John Jamieson’s Capriati (Glock’s London x Granette) who earned scores of 83 and 80 for the yellow ribbon.

We caught up with Coleman after the class to chat about his win, “I’m very new at this. My day job is eventing, and my second day job is show jumping. I did my first hunter class about two weeks ago, then I did this derby. It’s pretty new for both Tropics and me, but he was great. He’s a good boy and he wants to please.”

When asked about his mount, Tropics, Coleman commented, “I actually got him out of France as a 4-year-old. We thought that he might make a good event horse, but he just developed into a different horse. He was always a good jumper. He did some small grands prix and even won a couple of them. The owner of this horse, Jill Grant, wanted him to do hunter derbies. She recently purchased him from us and I train her, and she wanted me to show him in some derbies. He’s a chameleon, he can blend in anywhere.”

Coleman added, “Our farm name is Okonokos. I’m from Virginia and we are here in Ocala for about half of the year. We have some wonderful sponsors that purchased a beautiful farm on the other side of town for us to base out of and we absolutely adore Ocala. We are really lucky to be here. Now, with World Equestrian Center here, it’s like a dream come true. I don’t think there’s anything like it anywhere else in the world.”

Twenty-seven entries filled the stadium for the $15,000 WEC Derby 3′ Open. Competition was close, but Melissa Donnelly was on a roll this afternoon, claiming the win in the class aboard Elizabeth Becker’s Grand Tour.

Donnelly and the 15-year-old Warmblood gelding have taken top honors in several hunter derbies at World Equestrian Center in Wilmington, Ohio, and made the trip to Florida to top the first 3′ open derby of the season at World Equestrian Center — Ocala. The pair navigated a lovely first round for a score of 88, then returned in the handy round to show off their skills. Donnelly and Grand Tour chose inside turns to fences 4, 5, 7 and 9, and crafted a beautiful rollback to the trot fence option. The pair were rewarded with a score of 89 in the handy round, brining their overall total score to 177 for the blue ribbon.

Hot on Donnelly and Grand Tour’s trail were Susan McMorris and Mary Ellen Sanders’s Vulcan. McMorris and the 9-year-old Warmblood gelding earned scores of 87.5 and 88 for 2nd place. Havens Schatt and her own Actender PS (Action Breaker x Conpila) were just behind with scores of 84 and 86, earning them 3rd.

Donnelly of Just A Folly Farm in Oxford, Michigan was thrilled with her win, “My horse was on par for me today and answered every question I asked. He went in the ring super relaxed and extremely focused. I couldn’t have asked for him to be any more cooperative.”

When asked about her plan in the handy round, Donnelly said, “After fence 4 in the handy, I was hoping to stay really tight inside all of the decorations and continue across with a beautiful slice to the fence on the far end. For the trot fence, I was aiming for a nice smooth teardrop for a soft flow to fence 9, that way he would have time to see the jump and not be distracted on the backside. He did really well and I’m very happy with him.”

The $15,000 WEC Derby 3′ Non Pro saw 20 entries vying for the win this afternoon. Several scored into the high 80s and low 90s, however none could beat Laura Cho and her own Westley (Clarimo x Unique VIII).

Cho and her 10-year-old Holsteiner gelding were first in the order, setting a high standard with an impressive round and a score of 89. The duo returned near the end of the order for the handy round, displaying their handy abilities with inside tracks to fences 4, 5, 7, 8 and 9, and topped off their performance with an effortless, tidy rollback to the trot fence. Cho and Westley earned a second score of 89 for an overall total of 178 to top the class.

Many other riders found great success on course including Nicole Lyvere and her own Vaillero (Vaillant x Highlight Z) who claimed 2nd place. The pair executed two effortless rounds for scores of 90 and 78. Lindsey Ward and Morlynn Farm’s Cashmero were just behind with scores of 81 and 80 for a 3rd place finish.

Cho of Austin, Texas took time to chat with us ringside about her win, “The ring is amazing, it is a lot bigger than what we are usually showing in back home. My horse was a little more energetic than he usually is, but that makes him easier to ride. He can be kind of lazy. It was a really fun round and we loved the ring. The facility here is so nice. We’re really thrilled that World Equestrian Center opened this facility and we’re so glad we came.”

When asked about her plan in the handy round, Cho commented, “We planned to do the inside turns and he was really good and did all of them perfectly. We turned quickly after the outside oxer and did an angle to the single oxer with the purple flowers. He’s great, he makes it easy for me because if he sees the jump, he’ll go to it. He likes the derbies, he and I both get kind of bored in the regular hunter classes. The derbies really allow him to do his thing.”

Cho also told us a bit about Westley, “He is 10 years old. We purchased him right after he was imported about three years ago. We do the 3’3″ Amateur Owners and the National Derbies. He was a jumper in Europe before we got him and he really took to this. He’s slow, so he likes being a hunter.”