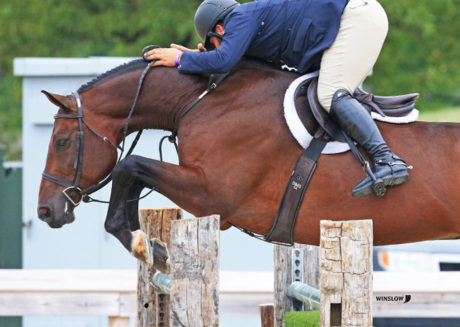 The second show of the World Equestrian Center summer series kicked off today with plenty of top equestrian sport in both the jumper and hunter rings. There are nine hunter derbies of all levels here at WEC this week, and today the green hunters took over the main hunter ring today for both the 3’6″-3’9″ and the 3’0″-3’3″ $2,000 Green Derby, while the Sanctuary Arena saw tough competition in the $5,000 Welcome Stake 1.35m sponsored by CWD Sellier.

No strangers to the winner’s circle, Boyd and the 14-year-old Dutch Warmblood gelding have taken the win in two previous $5,000 Welcome Stakes at World Equestrian Center, and were determined to claim a third win this afternoon. The pair was quick in the first round, jumping clear in a time of 86.689 seconds, well under the time allowed of 90 seconds. Boyd and the athletic bay gelding and continued straight to the jump-off of the Table II 2b event, picking up even more pace. The duo hugged the inside track to fences 5, 8AB and 9, stopping the clock at 40.551 seconds, ultimately taking first place.

Michael Burnett and his own Chagrand (Chacco Blue x Centogrina) were just one-tenth of a second behind Boyd and Berkley III on the short course. Burnett and the 11-year-old Oldenburg gelding sped through the first round in 84.426 seconds, then continued straight to the jump-off, crossing the timers at 40.655 seconds for second place.

We caught up with Boyd after the class to hear about his ride aboard Berkley III, “He felt great, it was a nice course. This is his first show back since March and he was fresh and ready to go. We made some great cuts across the jumps and some good turns, and kept a good pace. He was really good, I’m happy.”

The 3’6″-3’9″ section of today’s $2,000 Green Hunter Derbies belonged to Michael Britt-Leon of Windsor Stables in Alpharetta, Georgia. Britt-Leon dominated the class with five of the six entries. The course for the derbies was also designed by Bobby Murphy, and featured bending lines, an in-and-out and a pinwheel of fences surrounding the island by the ingate that took riders in multiple directions across the ring. Veteran hunter rider Britt-Leon found great success with many of his mounts, ultimately taking first place with Kelly Sims’ Private I (Corrado x Verdi).

Britt-Leon and the 8-year-old Oldenburg gelding took second place in last week’s $10,000 USHJA National Hunter Derby, signaling that they would be tough to catch in today’s derby. The pair navigated a flawless first round for a score of 86, then returned for the handy round, delivering a stylish second round for a score of 70. This brought their total to 156, placing them atop the leader board for the win.

Just one point behind Britt-Leon and Private I were Melissa Donnelly and Stephanie Georgopoulos’s Light Dance (Party Dance x Sun Dance). Donnelly and the 9-year-old Danish Warmblood gelding earned a score of 80 in the first round, then returned for the handy round to earn a score of 75, bringing their total score to 155 for a second-place finish.

Beisel and the 6-year-old Danish Warmblood gelding were the stars of the show in last week’s derby, where they earned a handy round score of 96. The pair was impressive again today, delivering a flawless first round for a score of 83. Beisel and the eye-catching bay gelding returned for the handy round, taking all possible inside turns in their usual style. The duo earned a handy round score of 84, bringing their overall total to 167 for the win.

Jeff Gogul and Roberts Stables, LLC’s Mystique (Ukato x Evisa) were also impressive in today’s 3’0″-3’3″ $2,000 Green Derby. The pair was rhythmic and precise in the first round, earning a score of 77. In the handy round, Gogul and the 6-year-old KWPN mare navigated all of the inside turns with ease for a score of 83, bringing their overall total to 160 to take second place.

Beisel took a moment after the class to chat with us about his win with MTM Bentley, “It was a little crazy doing the derby because I was showing jumpers at the same time. I had the last two rides in the handy round, and I just wanted to make sure I didn’t go in there and go off course. I’ve been memorizing so many courses in a short time today! It was a fun ride. MTM Bentley was nice, just a little tired with the heat and this being the second week of showing in a row for him. He was still really fun and handy. The course was great and enjoyable to ride.”

Beisel also added, “Thank you to Lori Taylor for letting me ride her horse.”