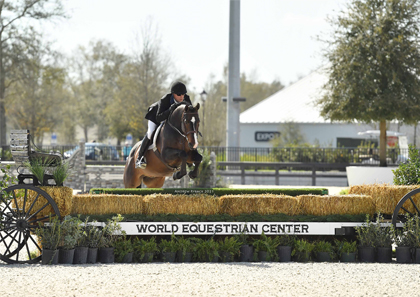 This afternoon’s $20,000 WEC Hunter Derby 3’6″-3’9″ saw 16 entries vying for the win, but none could best Doug Boyd and Mimi Rothman’s Calido’s Son (Calido I x Pusteblume). Boyd and the 16-year-old Holsteiner gelding have been on a winning streak, earning the Champion title each week that they have entered the Performance Hunter 3’6″ during the World Equestrian Center — Ocala Winter Spectacular 2021. This afternoon, Boyd and Calido’s Son brought their A-game, delivering a near flawless first round for a score of 89. The duo returned for the handy round, taking inside turns to fences 5, 7 and 9 and earning a score of 92, totaling 181 to top the class.

Samantha Schaefer and Madeline Schaefer’s In The Know (Arkansas x Cavelle) also found two impressive rounds in this afternoon’s class. Schaefer and the 11-year-old Warmblood gelding have taken two blue ribbons in the $20,000 WEC Hunter Derby 3’6″-3’9″ and were searching for another today. The duo earned scores of 93 and 86.5 for a total score of 179.5 and 2nd place.

Boyd took a moment to chat with us ringside about his win aboard Calido’s Son, “I was thrilled with him today, he’s a once-in-a-lifetime horse. He gives it his all every time. The course was great. It’s a lot of fun being here at WEC and this ring is a nice ring to ride in. It’s a test of patience because it can get you going a little more than you need to go.”

When asked about his plan in the handy round, Boyd replied, “There was really only one option approaching fence 7 to be different than the others, but he was going so well that I thought we should take the inside route that wasn’t quite as handy, and it worked out really well.”

Boyd commented on his special mount, “He’s 16 years old, this year, and his sire is Calido I. He has won everything from ribbons at Derby Finals to National Championships. He is the first horse that I’ve ever trained that wants to win every time. He’s always on his game.”

This morning’s $15,000 WEC Derby 3′ Open saw a highly competitive field of 25 entries the the scores of the top three placings remaining in the 90s throughout the class. Samantha Schaefer and her own Checkmate (Cassini II x Cornancer) earned top honors laying down two foot-perfect rounds. Schaefer and the 10-year-old Dutch Warmblood gelding earned a 6th place finish in Week 4’s $15,000 WEC Derby 3′ Open and returned this morning on the hunt for the win. The pair started off strong in the first round, taking all four high options with style for a score of 95. They returned for the handy round, rolling back perfectly in stride off of the right lead to the first fence, then taking an inside turn to the trot fence. Schaefer and Checkmate were rewarded with a second score of 95, totaling 190 for the win.

Timothy Maddrix and Missy Nolen’s Cypress were just behind Schaefer and Checkmate. Maddrix and the 10-year-old Warmblood gelding earned 4th place in Week 6’s $15,000 WEC Derby 3′ Open and delivered another flawless performance this morning. The duo found two stunning rounds for a pair of 94 scores, totaling 188 for second place.

Kate Conover and Take 3 LLC’s Point Blank (Cascari x Hallig VI) rounded out the top three placings in this morning’s derby. Conover and the 10-year-old Holsteiner gelding have taken ribbons in several $15,000 WEC Derby 3′ Open classes throughout the season and earned scores of 93 and 92 today, totaling 190 for the yellow ribbon.

Schaefer of Shadow Ridge Farm in Ocala, Florida, took a moment to chat with us ringside about her win aboard Checkmate, “He had a week off last week, and this was actually his only class this week. I thought he was a touch fresh in the first round, but he jumped really sharp. I thought he was really good in the second round. He’s a special horse. He has a crest-y neck and a big blaze, and when he jumps it’s really impressive. His flashy aspects definitely get him some bonus points.”

She also told us a bit about Checkmate, “He is a horse that I typically show in the 3’6″ Greens. We’ve had him for a few years, now, and have just been developing him. My sister has shown him in the 3’3″ Amateurs for about a year, too. He’s a funny horse and I don’t ride him a lot at home because we tend to argue. Kate Conover rides him every day during the week and prepares him really well. That program seems to work, so we’ve been sticking to that. He loves to show and he’s a really good competitor. Kate is a big part of his winning strategy.”

Forty entries took to the Stadium this afternoon for the $15,000 WEC Derby 3′ Non Pro. Christopher Coberley notched another win in the class, this time aboard David Glefke’s Undercover (Untouched x Tosca). Coberley and Undercover have earned several ribbons in the $15,000 WEC Derby 3′ Non Pro throughout the World Equestrian Center — Ocala Winter Spectacular 2021 but had yet to secure the win until today. Coberley and the 8-year-old Westphalian gelding navigated a stunning first round, taking all four high options for a score of 90. The pair returned for the handy round, taking a left hand rollback turn to fence 1 and an inside turn to the trot fence for a second score of 88.5. This brought their overall total to 178.5 for a 1st place finish.

Christopher Coberley also earned a top placing aboard Havens Schatt’s Actender PS (Action Breaker x Conpila). Coberley and the 8-year-old Oldenburg gelding earned 1st place during Week 5 and 2nd place during Week 3 in the $15,000 WEC Derby 3′ Non Pro and were impressive again today. The pair earned scores of 87.5 and 87 for a total score of 174.5 and 3rd place.

Luke Rinehart and Taylor Johnson’s Cavalli also eared a top spot in this afternoon’s derby. Rinehart and the 16-year-old Hanoverian gelding took 2nd place in last week’s $15,000 WEC Derby 3′ Non Pro and returned this afternoon in hopes of another top placing. The duo earned scores of 86 and 89, totaling 175 for 2nd place.

Coberley took a moment to chat with us about his win aboard Undercover, “I thought he went really well and listened to everything I asked him to do. He definitely showed off today. My plan in the handy was to do the inside turn to the trot fence and the left lead rollback to the first fence. He was great.”

Coberley commented on Undercover, “David Glefke owns him and has allowed me to show him. I’ve shown him in the Junior Hunters this circuit and he has taken Champion or Reserve Champion each week, so he has had a successful winter, so far.”

Before the start of the handy round in the $20,000 WEC Hunter Derby 3’6″-3’9″, the prestigious Style of Riding Award was presented to Doug Boyd for his classic style and his sportsmanship. The Style of Riding Award is generously donated by Bill Rube to be awarded to the rider who best displays the American Style of riding in the ring and sportsmanship outside of the competition arena. The recipient serves as a role model for preserving the integrity and tradition of equestrian sport. “This award is very special to me because the recipient of this award pays it forward both in and out of the show ring,” says Rube. Boyd received an elegant leather duffel bag and wore a white rose corsage on his lapel throughout the handy round to signify his achievement.

The Shapley’s Champion Groom Award for the best turnout in the class was presented to the groom of 3rd place finisher in the $20,000 WEC Hunter Derby 3’6″-3’9″, Ruby Tuesday. Shapley’s is a proud sponsor of the World Equestrian Center and is thrilled provide an award each week of the Winter Spectacular to the groom of the best turned out horse. Ruby Tuesday’s groom received a Shapley’s Award Bucket for the mare’s stunning turnout.