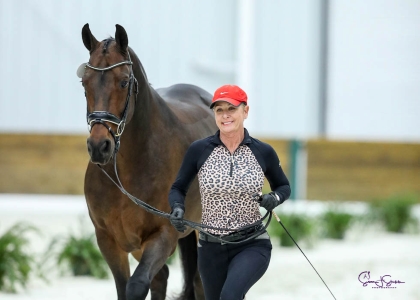 This competition will also serve as a qualifier for the 2022 FEI North American Youth Championships at the Junior and Young Rider levels, as well as for the Pony, Children’s and Brentina Cup divisions at the 2022 US Dressage Finals.

All CDI classes will be held in the CaptiveOne Advisors Arena, also known as Arena 1.

Susan Dutta, a U.S. Dressage team rider and Nations Cup bronze medalist, is awed by the facility in her first time at World Equestrian Center – Ocala.

“All I can say is wow,” she exclaimed. “It is truly amazing. What a facility. There is super stabling and amazing rings. It is just astonishing what they built here. The footing is fantastic and it’s air-conditioned, which is incredible because we have been dealing with the summer heat in Wellington. Coming here is delightful.”

Dutta will be competing Don Design DC, an 11-year-old Hanoverian gelding by Der Designer x Sir Donnerhall that was on the U.S. Dressage Team short list for the 2020 Tokyo Olympic Games.

“He is an amazing horse,” said Dutta. “He just had a super last season, so I am trying to bring him out early and actually put him in this type of environment. I am so excited to show him here. It will be a great experience for him.”