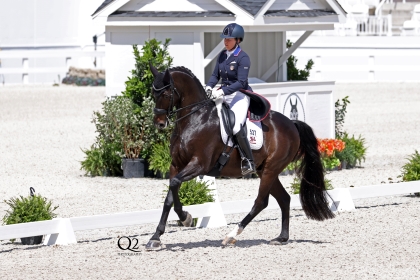 April 16, 2022 – Ocala, Fla. – Victory in the Grand Prix Special CDI3* on Saturday, April 16, went to Katie Duerrhammer (USA) and Paxton, owned by Kylee Lourie, at the World Equestrian Center Dressage III show, sponsored by Hampton Green Farm and Discover Dressage. This marked their second win of the week after they took the top spot in Thursday’s Grand Prix CDI3*.

There were 15 entries in the Grand Prix Special CDI3*, and the top six all scored over 70%. Duerrhammer and Paxton led the lap of honor with a score of 73.638%. Jessica Howington (USA) and her own Cavalia finished second on 71.936%. Rounding out an all-American podium, Alice Tarjan and her own Serenade MF placed third on 71.639%.

Saturday’s Special victory was not only a personal best for Duerrhammer and Paxton, but a significant step forward in their experience at the grand prix level. While consistency is important, it was the feeling that Paxton gave her that made Duerrhammer appreciate the performance.

“The final centerline, I don’t think I’ve ever felt him do it like that,” she expressed. “He really took a breath and said that he was safe to stay there, and that was really special to feel.”

After Thursday’s win, Paxton had an easy Friday with a brief hack in the morning followed by hand walks, grazing, recovery therapies, and “very long naps.”

Duerrhammer laughed, “I have pictures of him pressed up against the wall, face all smushed in the shavings, taking a nap like a little boy.”

With the temperatures rising on Saturday afternoon, Duerrhammer felt Paxton was suited for the weather. She explained, “He’s very hot. The pushing power was a little tired today but he’s one that you want to have when it’s hot outside and it’s a long test. He’ll never be lacking in the energy. It may not be as brilliant as in places in the Grand Prix, but he will never feel like he doesn’t have enough energy.”

The experience of two CDI grand prix victories with Paxton has not sunk in yet for Duerrhammer, but she takes it all in stride, remembering that the 11-year-old Westphalian gelding by Dante Weltino OLD x Don Marco is still green at this level.

“I think it’s important to remember that he is only 11. If he comes out the next week and gets a 68%, then that’s okay,” she remarked. “It’s all about the journey and preparing him for things later in his career. Just because he can do it once doesn’t mean he’s going to do it every time. I want to ride who he is today and be appreciative of that. After doing so well today, I’m going to go home and let it sink in a bit. This weekend was extra special because my mom, Elizabeth Johnson, who trained me all my teenage years, was here this weekend from California.”

Marek and Duvel Are Two for Two

Anna Marek (USA) and Duvel, owned by Cynthia Davila, made it two for two wins during the WEC Dressage III week by topping the Intermediate 1 CDI3* with a score of 72.745%. They were the only pair to top 70% out of 14 entries in the class.

Second place went to Rebecca Cohen (USA) riding Tuschomie, owned by Carol Cohen Hodess, who scored 69.412% – another personal best for them. Kyle McIver (USA) and her own Gigi placed third with 69.118%.

It was another personal best score for Marek and Duvel as well, and Marek felt that there was improvement from Friday’s Prix St. Georges due to her taking a risk and asking for more power than she ever has before.

“I know that it’s in there, that extra amount of power, but sometimes when I would do it before it would add a little bit of tension,” she explained. “Today, he went in there and he was just completely with me the whole ride. It was so much fun; it was probably one of my favorite rides I’ve had on him.”

Marek has been riding the experienced 14-year-old KWPN gelding by Florencio x Metall for two years, but Sunday’s I-1 Freestyle CDI3* will be their first freestyle together.

“Freestyles are a little bit tricky for me. Why I like dressage is because I’m told what to do, when. I like to know that from B to G I’m supposed to half-pass!” she laughed. “We might wing it a little bit, but he’s such a good boy. We’ll give it a go tomorrow.”