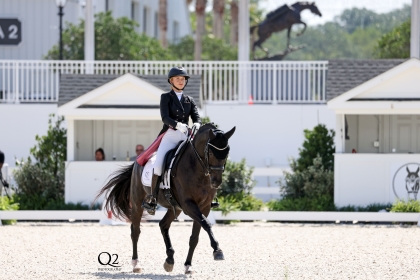 WEC: When did you start riding dressage?

I started riding dressage with the ambition to compete in the middle of January. I had sat on a dressage horse three times in my life before. I had a lot of training in dressage with my show jumping horses. Over the past couple of years, I became very close friends with Louisa Eadie, and I ended up getting an opportunity from a client that has this wonderful horse, Ferrari, who is a school master. The owner is pregnant, so she wasn’t riding and gave me the chance to go have fun. Louisa told me to go for it and she helped organize.

My original goal was the Prix St. Georges. I wanted to be able to complete that caliber of a test. I was ready to push myself in a completely different direction. I ended up falling in love with it. Louisa’s goal for me was to come do this show before I leave for Europe this summer. I just got short listed for show jumping at WEG [FEI Jumping World Championships], so this was the time of the year that I could really do both and be able to enjoy it. I thought she was crazy to have this as my goal, but we made it.

To be able to come to a facility like this for the horses and riders is just unbelievable. For me, this feels like a sweet vacation from my real life. It has been so much fun. This was actually my first time here since it has been finished. I was able to come when they were first building, but seeing it now is just unreal. I am hoping that there can be even more show jumping shows here and if I am lucky, they will have dressage the same time, so I could compete in both.

WEC: Tell us about Ferrari.

Ferrari had been trained through Intermediate II until he was 10 years old. Then he did some lower-level junior competitions. He hasn’t really done anything at the Prix St. Georges level or anything above that for quite a few years. He’s 19 years old now and I actually found out this is his first FEI show. I didn’t know that until we got here, but he’s a pro. I couldn’t ask for a better first horse.

He was a little shocked by the arena the first day, he went in and did a little spin, but for me that’s so normal with my show jumping horses, I was completely relaxed. He tries so hard, and he has already taught me so much.

WEC: Is it challenging to go from show jumping to dressage?

It’s an interesting change. There are some things I am comfortable with and others that really stress me out. For example, the timing. The concept that there is an exact time where you have to be in the ring is super stressful, that usually doesn’t exist in my world. It’s been a good lesson for me. I am lucky enough to have Louisa as a coach, because she understands that I want to push myself. But, if I make a mistake, I can laugh about it. I just try and be better each and every ride.

The most challenging maneuver for me is the canter pirouettes. This movement requires the highest level of engagement, you have to be so brave with the collection. For me, it’s difficult because I don’t have that level of engagement with my jumpers, but that’s the goal. I really push myself to have that because if I am able to master a schooling pirouette, I can teach my jumpers and I can be the fastest in the jump off. You win in the turns, so if they can sit and turn like that, it will be a game changer.

I love one-time tempi changes. Sometimes when I do threes or fours, I get too many and start doing one or twos. It’s challenging but by far my favorite maneuver.

WEC: Have you been applying a lot of dressage to your show jumping riding?

I have been applying dressage in a different way for my show jumping horses. People think I am doing dressage to change my jumpers and honestly, that’s not what I am at all doing. There are people that are very successful in show jumping that more or less do dressage between the fences, but that is not my strength. I am not physically big enough to do that. I am a big believer that my horses are able to jump their best out of a gallop, in the classical American forward seat. I don’t want to change anything about that. The more homework I do, the lighter I can be in the ring. That’s really what has made the difference for me.

I am able to enjoy flat work and have a goal each day, I decide what I am going to focus on with each horse. It might be straightness. It sounds like a super basic topic but even though I compete in 5* international competitions I still focus on the basics. A lot of people dismiss elements like that. I have a newfound respect and enjoyment of the basics, where it’s not a burden to do it or a chore. It’s something I can look at in a very different way and enjoy the process.

When I go into the arena with my show jumpers and I am warming up, I am not thinking about dressage at all. I spend most of my days riding all my jumpers because that is my focus, but in the late afternoon when I am finished, I’ll go ride Ferrari. Louisa always says she has to de-jumpify me. She has to change my seat and relax my leg.

When I first started dressage, I wanted to keep it a secret. I didn’t want anyone to know. I showed at Global a bunch of times even during FEI show jumping shows that were on the grass, but when I would change, I would just try and keep my head down so no one could recognize me. McLain eventually found out and asked me what I was being taught because he was thinking it could affect my show jumping. I told him the biggest thing that Louisa told me was I use too much leg and I had been focusing on changing that. His face completely changed and asked if I was joking because he had been telling me that for years! McLain told me to keep doing dressage after that. Riding dressage has helped me recognize some instincts that I have that I need to improve on.

WEC: What are your goals and ambitions for dressage?

My original goal was to do the Prix St. Georges at a national level, and I am actually doing more than that now. My first goal and ambition is to most importantly have fun. My second goal is to be able to one day work with a younger horse and train to an FEI level. I don’t need to do the grand prix, but I would like to be able to hold my own and complete a clean test at a competitive level.

To show right now as an amateur is such a privilege. I have never been an amateur, as soon as I turned 18, I went pro in show jumping. I am also grateful to be able to do both disciplines. I am in no means switching, but I would like to continue to have fun and one day work with a younger horse.

Thank you, Lillie, for taking the time to chat with us! We wish you all the best in Europe this summer and we hope to see you back soon for dressage and show jumping!