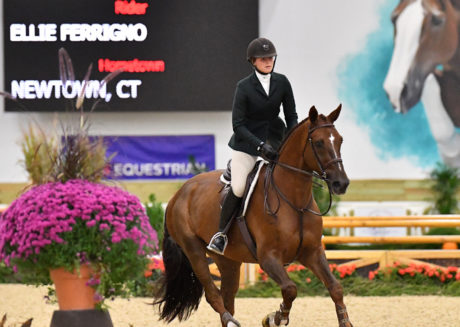 Accomplished Junior rider Ellie Ferrigno took her first trip to World Equestrian Center last week for the Capital Challenge Horse Show. Ellie had a stellar show, earning ribbons in every ring and enjoying every ride on her four mounts for the week. We sat down with Ellie after the show to chat about her (quite comical) start in the saddle, her success in her riding career and her first impression of World Equestrian Center.

Ellie: I’m 18 years old from Newtown, Connecticut. I am currently a freshman at Auburn University and I ride on their equestrian team. I ride with Val Renihan of Findlay’s Ridge and my mother Abby Ferrigno of Rabbit Hill Farm.

Ellie: My whole family is all about riding. We’ve always lived on a farm. My funny little thing when I was little was that I thought riding was too accessible and didn’t really want to do it. My mom was dead-set on me riding, so when I was five years old she bribed me to ride by giving me a dollar every time I rode. After a while I finally decided that I liked it.

WEC: When did you start showing horses?

Ellie: I was always very tall, so I had to move onto horses very quickly. I started on horses when I was 10 years old and would do the 3′ medals. I started doing the Big Eq when I was 11 years old, and qualified for and showed in the Maclay Finals that year.

WEC: What are you doing now?

Ellie: I’m coming to the end of my junior career right now. I’m looking to finish up my equitation finals and hopefully get some good ribbons. I’ve been catch riding a lot of horses, which is fun.

WEC: Tell us about the horses you rode this week at Capital Challenge.

Ellie: I have had FRH Remarkable, or Remi, since I was 13 years old. Remi is kind of my partner in crime. He’s been there with me throughout everything. I got my first ribbon in an equitation final on him. My first championship win at Regionals was on him. He’s been a part of everything that I end up counting as a big moment in my life. His personality is super sweet. He’s like a lap dog. He’s the best. I’ve had him for so long that it’s just like second nature riding him.

Astro De Ravel is a young one that I’ve started developing this year. He’s owned by one of my mom’s customers, Olivia Robertson. I’ve spent a lot of time developing him through this year, so he feels like one of my own. It’s funny because his personality is very similar to Remi’s personality. They’re very happy, kind horses and they like having a lot of attention.

Mercy Me is owned by Don Stewart. I think he’s the coolest horse. He reminds me of my good Junior Hunter that I had for a long time, Capitalized. I think he’s going to be a good up-and-comer. He’s a very good mover, a great jumper and I just love riding him.

I also rode a sale horse in the barn named Shark. He’s a really cool horse. He has a lot of experience in the 1.50m jumpers. A young professional that rides with Val bought him, and she is offering him for sale, so I got to pick up the ride for this week. He’s awesome, he’s so fast.

WEC: How was Capital Challenge?

WEC: Is this your first time at World Equestrian Center?

Ellie: Yes, this is my first time at WEC. I didn’t know what to expect because I’m so used to Capital Challenge being in the same place for so long, but this is the coolest place. I was so shocked with how awesome it is. Everything is indoors, but the garage doors are open. It’s nice that we can have something that feels like a championship like we’re used to in the fall. I feel like I’m in a really big environment, which has made this show feel super special. I’m hoping that, in the future, other championships can be moved here because it’s a really cool place.

I would like to say a thank you to World Equestrian Center for hosting such an amazing show, especially on such late notice. To put together something of this caliber and this big with so many people coming, I think they’ve done such an amazing job. Hats off to WEC!

Thank you, Ellie, and good luck at the rest of indoors!