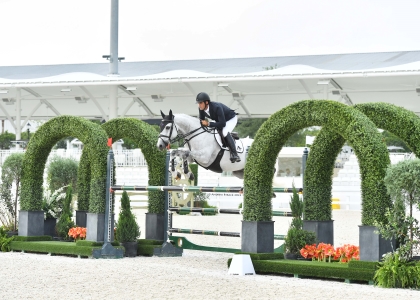 Ocala, FL – An exceptional field of 57 horse-and-rider combinations took to the WEC Grand Arena early this morning to compete for the blue in the $10,000 Buckeye Nutrition Futures Prix. Horses were jumping to perfection today with 26 of 57 delivering a clean first round over Guilherme Jorge’s (BRA) track. Ultimately, Evan M. Coluccio and Diabolo De La Roque (Levistan x Mystique De la Roque) took the win in the class, besting 17 other double clear efforts.

Coluccio (USA) and the nine-year-old Selle Francais gelding entered the WEC Grand Arena toward the middle of the order delivering a flawless first round in 69.230 seconds, well under the time allowed of 75 seconds.

Coluccio was very proud of Diabolo De Roque, “He has grown up so much. I think he has a big future ahead of him. This was one of his bigger wins and to be able to get a win in a class that big, in this arena, is so exciting. We were so thrilled to be here. We came all the way from Virginia and do not regret it one bit.”

“With that many entries I knew it was going to be a fast class, so I used my horse’s stride to my advantage. I did one stride less wherever I could. He stayed with me when I pushed, and he was in it to win it.”

Angel Karolyi (VEN) slid into third place toward the end of the order with Imani Mackani’s S & L Sage (Wandor Van De Mispelaere x Bonbon VII De Ninive). Karolyi and the 15-year-old Belgian Warmblood gelding laid down a clean first round in 68.209 seconds and a speedy jump-off effort that stopped the timers in 33.593 seconds.