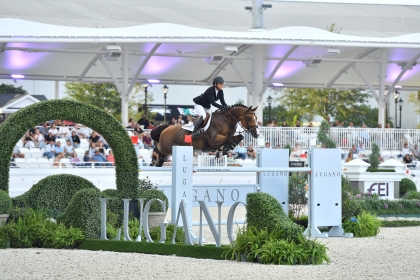 Ocala, FL – An international field of thirty-one athletes took to the WEC Grand Arena under the lights to contest the $140,000 Lugano Diamonds FEI CSI3* Grand Prix over a track designed by renowned course designer, Guilherme Jorge (BRA). The action packed class was the perfect culmination of World Equestrian Center – Ocala’s inaugural week of FEI show jumping competition. At the close of the evening’s competition, it was Australia’s Lauren Balcomb and her longtime partner, Verdini D’Houtveld Z that earned the first international grand prix victory at World Equestrian Center – Ocala.

Riders from twelve nations tried their hand at Guilgerme Jorge’s challenging course that tested competitors with an imposing double combination and a tight time allowed of 79 seconds. As the first round concluded, the returning line-up consisted of five representatives from three countries prepared to battle it out over the jump-off track.

The first entry to return was Aaron Vale (USA), who managed to deliver clean first rounds on both of his mounts, Prescott and Condarco. Vale was the first to return on Prescott, a 10-year-old Holsteiner gelding by Lordanos. The pair swiftly completed the course in 39.06 seconds, but with an unfortunate rail at the final fence.

Hunter Holloway (USA) and Hays Investment Corp.’s Pepita Con Spita were the next pair down the ramp into the WEC Grand Arena with the hopes of a clear round. Holloway and the 11-year-old Westphalian mare by DSP Con Spirit x Come On delivered an exceptional round in 37.64 seconds, to ultimately secure second place.

Holloway was effusive about her mare, “Pepita is my tried-and-true mount. I know her like the back of my hand. She comes out and proves herself every time she steps in a ring. Tonight, she felt like amazing, and she put it all out there for me.”

Lauren Balcomb and scopey 11-year-old Zangersheide gelding by Verdi Tn x Carentino 2 followed Holloway. Balcomb and Verdini D’Houtveld Z galloped throughout the track, taking tight inside turns while soaring to the top of the standards, setting the new time to beat of 37.15 seconds.

Balcomb never thought that Verdini D’Houtveld Z would be winning an FEI grand prix, “I bought Verdini as a six-year-old to be a three-day horse. I evented him for a little bit, then decided that was not the route to go down. I met Sharn [Wordley] and that’s when I started to compete in show jumping.”

This was Balcomb’s first FEI grand prix win, “I have been knocking on the door recently, so to win right in my backyard is so special. All of my friends were here to support me and now I can’t wipe the smile off my face.”

After Balcomb, only three riders remained: Evan M. Coluccio (USA), Peter Petschenig (AUT) and Aaron Vale on his other mount Condarco. Coluccio dashed through the short course, but had one rail down for fifth place. Petschenig followed aboard Brooke Peterson’s Ennebel Van Het Posthuijs. The pair navigated the course cleanly in 38.89 seconds to ultimately earn fourth.

Aaron Vale was the last down the ramp aboard Thinkslikeahorse’s 14-year-old Oldenburg gelding by Conthargos x Darko. Vale and Condarco darted around the track in 38.87 seconds to slide into third.

Vale enjoyed tonight’s courses, “It was a very fresh course tonight. None of the jumps were in places that they have been before. It was a lot of fun to ride, and I am thrilled to take a nice third place tonight.”