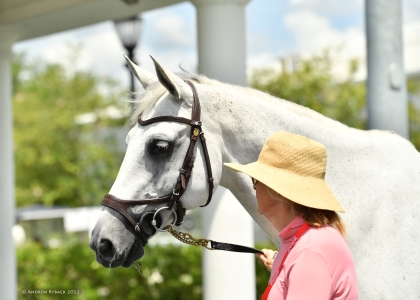 FEI CSI3* classes will be held in the WEC Grand Arena.

International show jumping competitor Erynn Ballard (CAN) joins us for the second week of FEI CSI3* competition at World Equestrian Center – Ocala. Ballard shared her thoughts about World Equestrian Center – Ocala now hosting FEI sanctioned competition, “I think the possibilities are now endless. There is no question that this is the best facility in the entire world and now with the competition offered, it’s going to attract even more top riders.”

Ballard brought a variety of different horses to show, “We brought 45 horses. We have some of our best young horses here to compete and a group of horses that have we’ve never show before.”

“I also brought three horses to show in the FEI CSI3* competition, Nadale Van Dorperheide, Cecile 30 and Castor D’Hem. Cecile 30 and Nadale Van Dorperheide are both nine-year-olds. Castor D’Hem is a 10-year-old. With the number of FEI classes offered this week, it’s such a great opportunity for the young horses to go in and receive world ranking points.”

Show Jumping fans can enjoy wall-to-wall livestreaming of the event courtesy of ClipMyHorse.tv.