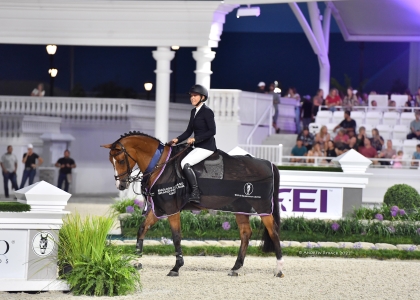 “I like going first here. Most people prefer to go toward the end because you are a bit better off watching people go before you. On Apple, I am better just doing my thing,” laughed Fenney. “I do what I do, then hope they chance after me and make mistakes.”

“I have been knocking on the door recently, so to win right in my backyard is so special. All of my friends were here to support me and now I can’t wipe the smile off my face.”

“He has grown up so much. I think he has a big future ahead of him. This was one of his bigger wins and to be able to get a win in a class that big, in this arena, is so exciting. We were so thrilled to be here. We came all the way from Virginia and do not regret it one bit.”

Maria Rasmussen and Maya Grove’s Goodfella secured their second consecutive win with notable scores from the judges in the $12,500 WEC Ocala 3’6”-3’9” Hunter Derby.

“The course rode a bit more open this week than last week. It was fun for the horses because they got the chance to gallop around and show off a bit.”

Timothy Maddrix and Candid Traveler journeyed their way to the top in the $10,000 WEC Ocala 3’ Open Hunter Derby.

“We got Cash [Candid Traveler] toward the end of the winter circuit. He has the best canter, you don’t have to touch the reins and he jumps a ten every time. He is just starting to get a hang of the handy, this is probably his third hunter derby ever. First rounds have always been easy, but when we get to the handy, he wonders where we are going,” laughed Maddrix. “Today, he was looking for the jumps.”

“I have had Ocean Avenue for a year and half. She is the best and loves to win. She’s a bit opinionated and knows her job. It’s been a bit of a learning process figuring her out, but I’ve found that if I let her make the decisions, it always works out.”

“Cetano Van Aspergem Z is a very hot horse. Today, he was much more rideable than last night. When he is super-hot, he is much more challenging to ride. Today, he felt great.”

“I watched Santiago go and I had a ride around the short course on Cristo Beech, so I knew how the course rode. Prescott is a big horse, but he is able to get across the ground quick, so I figured if I was able to get the strides that everyone else was doing, we could be quicker. I did end up really taking a chance to the Lugano Diamonds vertical and left one out, but he kept it up and almost won by two full seconds.”

“It is fantastic to have FEI competition here. The prize money is great and we gain world ranking points, which is very valuable. There were a lot of great competitors here today, so it was nice to get the win.”

“Today marks the beginning of history at World Equestrian Center – Ocala. I can see some of the biggest show jumping events in the world happening here. The venue is by far the greatest in the country, in my opinion. Everyone is extremely friendly, and the facility is breathtaking. The horses love the stalls, and the facility is so pristine and clean, it’s wonderful.”

Twenty stunning ponies gathered at the UF Health Arena 2 on Friday where Penelope Sugg and her own Sunshine Kid snagged the victory in the $2,000 WEC Ocala Pony/Children’s Pony Hunter Derby.

Congratulations to all entries on another successful week of equestrian sport at World Equestrian Center – Ocala!