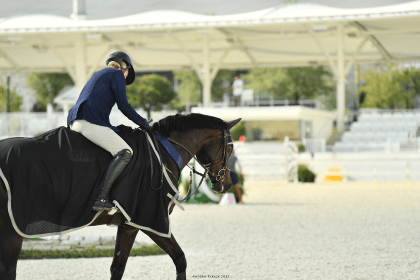 Fenney and MTM Farm’s MTM Dolce Vita (Philadelphia x Diarado) were the second to last pair to enter the class, delivering a clean and fast first round stopping the clock at 70.587 seconds, well under the time allowed of 77 seconds. Fenney was determined to beat the current leader, “Dory [Douglas] that is from our barn was currently leading the class, so I knew the track and the striding that she took. Dory and I are very competitive with each other, so I had to give it my all,” said Fenney.

Fenney and the nine-year-old Holsteiner mare advanced straight to the jump-off, jumping fence one on a left to right angle, “After the S turn [fence one, two, and three] I was able to gallop to the in-and-out, but I couldn’t fly too much so I galloped as much as I could then balanced for the last three strides. I watched a lot of riders go wide to the bamboo fence, but I was able to hug that turn which I think shaved off a few seconds.” Fenney and MTM Dolce Vita galloped through the rest of the course not pumping the brakes once, to stop the clock at 43.690 seconds to earn Fenney another feature class win.

Second place honors went to Dorothy Douglas and MTM Through The Looking Glass (Arkan x Roshai’s Last Tango). Douglas and Davenport Farm’s MTM Through The Looking Glass delivered a smooth first round course stopping the clock at 72.660 seconds. Douglas and the 13-year-old KWPN mare jumped-off immediately, leaving out a stride from fence one to two, galloping through the rest of the course and leaving all rails up to stop the clock at 44.643 seconds. The pair were a full three seconds faster than third place finishers, Gabriel De Matos Machado and Clearwater.

Gabriel De Matos Machado and Karen O’Connor’s Clearwater were the second entry in the class to jump double clear rounds. Machado also earned ninth place in today’s class with his own Bonza. Machado and Clearwater (Clearway x Tricolore) produced a clean first round stopping the clock at 72.573 seconds. The pair advanced straight to the jump-off, delivering a smooth short course leaving all rails up to stop the clock at 47.887 seconds to round out the top three.