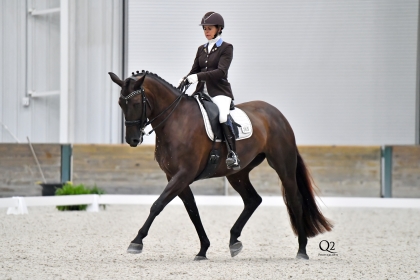 December 21, 2022 – Ocala, Fla. – The Dressage V USEF-rated national dressage show at World Equestrian Center – Ocala, held December 15-18, 2022, featured action at all levels, from Training Level up to Grand Prix. The show is an official qualifying competition for the Great American/USDF Regional Championships and was sponsored by Hampton Green Farm and Discover Dressage.

From the eight tests that Franziska Seidl rode on her four horses, she won six and finished second in the remaining two. Her top score of 70.125% came via the Grand Prix Freestyle she rode on Con Brio SDF, her own 15-year-old KWPN by Sir Sinclair, who was bred by Sheri Evers-Rock. The pair also topped the Grand Prix with 67.717%. It was a particularly remarkable feat given that the gelding is frightened by other horses, so Seidl can’t warm him up in the conventional way.

“He was a little tricky as a young horse as he is afraid of other horses, but he trusts me and tries his best for me in the ring,” explained Seidl, who is originally from Switzerland but has lived in Florida for a decade, now residing in nearby Morriston. “I just don’t warm him up with the others. I walk and trot a bit and try to find space. He is a little better over the years. He’s not making it up; he’s really scared. Luckily, from his nature and from his training he’s supple and doesn’t need to practice the exercises all the time. If I can warm up his muscles, I don’t have to practice the changes and all the other movements in the warm-up. If I can get him into the ring with warm muscles, then he can do everything. That’s a big plus with him.

“I’ve had him since he was seven and trained him myself — and I love him. I first saw him when I gave a clinic here in Florida and a lady showed up with him and said he was tricky, and that he was bolting,” added Seidl. “She told me about his problem with other horses and I decided I would give it a try, so I bought him. We understood each other from the beginning.”

Seidl plans on campaigning Con Brio in some CDI shows in Wellington this winter and will attend many more shows at WEC – Ocala, which is just a 20-minute drive from her base.

Another of her horses, the 11-year-old KWPN gelding Gucci, by the Uphill son Briljant, made the demanding step up to big tour at the Dressage V show. He contested two Intermediate II classes, winning them both with scores north of 65%. Seidl, who is 58, bought him from a video as a five-year-old and imported him from Holland. She had intended to sell him, but says she is notorious for keeping almost all of them.

“When the trailer showed up with Gucci, he got off and he was absolutely huge,” she recalled. “I thought he was about 16.2 hands high, but he was at least 17 hands — I realized I hadn’t even asked about that!

“I’m very proud of how he did at his first big show,” she enthused. “He got great scores for the piaffe/passage, and that’s always so important. He’s still green, so there were a couple of mistakes, but I’ve trained over 20 grand prix horses in my life and it’s still so exciting the first time going in the big tour to see if they’re going to do it or not. He stepped up and he was awesome. On the first day, the judge wrote ‘Great horse,’ and that’s all you can wish for. He has scored over 71% at Inter I, but I think he’s really a horse for the big tour.”

Continuing the trend of the stallion Uphill featuring in her horses’ bloodlines, Seidl rode Jolene, who is by the Uphill son Carlton Hill, to a 66.029% Prix St. Georges win and a second place at Fourth Level. She has owned the black mare for three years.

“She’s my dream horse, she always wants to do her best, and she has a great work ethic. Every day she shows up,” added Seidl, who relishes the opportunity to show at the WEC – Ocala facility. “It’s so wonderful to show at WEC; you have the best conditions. What else can you wish for?”

Sheila Harwood’s KWPN mare Holly, by Superio, delivered a plus-67% Fourth Level win for Seidl to round out the show on Sunday. Last winter, when the mare arrived, she had only shown at Training Level, so she has made stellar progress in a year.

“The most important thing for me is to train horses up the levels in harmony so they can grow into their talent because they have trust in their rider,” concluded Seidl, whose many students at the show — including Rebecca Lord, Andrea Mitchell, Jami Macintosh and Florence Wetzel — also posted great results.

Jennifer Marchand had a busy weekend, riding 10 tests and winning seven of them. Her top scores (including a 76.8%) were awarded for her rides in the USEF Four-Year-Old Test on Mary Ann Hall’s Daily Diamond daughter, Nota Bene.