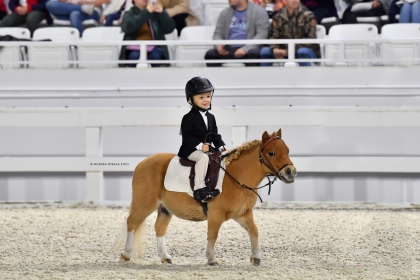 The finale of the 2022 USEF Fall Show Series at World Equestrian Center – Ocala came to an exhilarating close as Tracy Fenney and Kristen Vanderveen raced head-to-head in a competitive seven horse jump-off. At the end of the night, final contender Tracy Fenney and fan favorite MTM Apple captured the victory and finished out the year on top.

“I have owned Jantien De Muze a little under a year. Our partnership wasn’t the smoothest in the beginning. We started showing last winter doing the 1.10m and 1.20m. He had jumped big classes in his past, but he wasn’t very rideable, so I went back to the basics and started all over again. Now, I would say he is one of my best horses.”

Tracy Fenney saved the best for last in the $100,000 Hampton Green Farms Grand Prix as the final contender to return and capture the victory aboard fan favorite MTM Apple.

“I did eight and eight in the first two rollbacks. I found the bending line in the six and got to the double combination in eight strides, where Apple just curved right in and curved right out. Then I got seven back to the skinny and did ten strides home, which is crazy because it walked in 13. I even slowed down to the last fence, but we still left out three strides.”

“Acajou is a seven-year-old mare that I have owned for almost a year. She is getting better with each ride. She has a bit of a mare temperament and can be a little tough at times, but she is always clear. She tries her heart out in the ring and is a naturally fast horse. The plan today was to use her carefulness and speed in the jump-off.

“We planned to do the inside turn after the high option oxer when we walked the course. ‘Attendu’ is very handy and excels in the derbies, so I knew the turn wasn’t going to be a problem for him.”

“I showed ‘Cover’ as a first-year horse back in 2020. I used to ride him for Carol Stillwell with guidance from Bill Ellis and David Connors. Then he was sold to California and just came back into my life. Makoto Farms and Don Stewart gave me the ride on him, and it has brought back so many amazing memories of Bill who sadly passed away last year,” said Conover. “Bill Ellis gave me this jacket that I am wearing today, so it felt like he was with us and watching over us.”

“I was third coming back, so I knew I had to risk some inside turns to win. C-Star is surprisingly very handy for being an 18hh horse with a giant stride, but he is soft in the bridle, you just need to look where you want to go and he is right there with you.”

Tracy Fenney and MTM Apple started their week off with a win in the $24,000 C. Jarvis Insurance Welcome Prix.

“I wasn’t planning on doing the inside turn after fence one, but after I finished the first round, I went to take a look and I knew Apple could do it. I thought it was the only way to beat Kristen [Vanderveen] without running like a crazy person because her horse is so quick across and off the ground.”

Adele Dewar and Down To A T took home the blue ribbon in the $2,000 WEC Ocala Pony Hunter Derby.

Congratulations to all competitors on a successful year of equestrian sport! We hope to see everyone back soon for the 2023 Winter Spectacular Show Series!