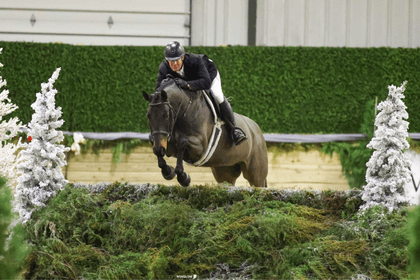 Wilmington, Ohio – A field of picturesque hunters met in the R+L Arena Friday afternoon to vie for the win in the $15,000 USHJA National Open 3’ Hunter Derby and the $15,000 USHJA National Non-Pro 3’ Hunter Derby at World Equestrian Center – Wilmington. The second hunter derby day of the Winter in the Midwest series saw nearly 45 horse-and-athlete combinations ride for top honors. Each unique pair impressed the judges with their ability to display both brilliance and athleticism over Bobby Murphy’s (USA) beautifully set tracks evocative of a winter wonderland.

Nineteen distinguished hunter pairs took to the R+L Arena to contest the $15,000 USHJA National Open 3’ Hunter Derby. At the conclusion of two rounds of competition and scores soaring into the 90s, none could best Greg Crolick and Jon Cotton’s stunning Handwritten (Cellestial x Antaris).

The talented professional boasts an extensive list of top placing hunter rounds at famed horse show venues including the Pennsylvania National Horse Show [Harrisburg, PA] and the National Horse Show [Lexington, KY]. Crolick, of Greg Crolick Stables in Clarkston, Michigan, used his experience to his advantage atop all three of his elegant mounts in the highly anticipated class.

Crolick piloted the 12-year-old Dutch Warmblood gelding to a smooth first round, granting him an appropriate gap at the single oxer and a flowing ride to the high options, allowing him to jump in textbook hunter form. The duos first round effort earned them a high score of 92, putting them in the lead moving into the handy round.

Coming back on all three rides in the second round of competition, Crolick bested his own score aboard Jon Cotton’s Testify (Cassini II x Valencia T). The 8-year-old Hanoverian gelding demonstrated experience beyond his years, earning scores of 88 and 94 for an overall score of 182 to take the initial lead.

Entering on his final mount, the exceptional Handwritten, Crolick made every handy effort available to him to score a 93 for an overall score of 185, ultimately securing his first and second place position in the competitive class. Crolick also earned sixth place aboard Nicole Jeffries Clooney (Gullit HBC x Uniki).

For the second week in a row, Griffin, training out of Westminster Farm in Huntsville, Alabama, piloted her longtime mount Diacasir to two foot-perfect hunter rounds in the R+L Arena. The pair has an impressive list of wins together in the hunter derbies and in the equitation ring, most recently competing in both the Dover Saddlery/USEF Hunter Seat Medal Finals and the ASPCA Maclay Championship. After laying down a near perfect first round earning a high score of 92, the duo returned last in the handy to ultimately best the field of competitive hunter athletes.

“My horse is better off the right lead. I took a bit of a different approach and went off the right to the end jump. I came back to the bending line in a forward eight strides and then took the inside track to last jump to secure the handiness,” Griffin comments on her strategy in the handy round to stay on top of the leaderboard.

The 9-year-old Holsteiner gelding executed the handy plan effortlessly, showcasing his well-practiced skills from the equitation classes. The pair was in perfect sync through the entirety of their efforts, earning a second-round score of 88 and an overall score of 180 to secure their second win in the $15,000 USHJA National Non-Pro 3’ Hunter Derby.